Cancer is one of the most feared diseases in the world and, while the ‘magic bullet’ cure has so far failed to materialize, there are new breeds of therapeutics, such as epidermal growth factor receptor (EGFR) inhibitors and vascular endothelial growth factor (VEGF) inhibitors, that are making a real impact on patient survival. However, improvements in survival come at a cost, and hefty increases in oncology drug prices are making life difficult for those agencies whose job it is to make reimbursement decisions.

Cancer is one of the most feared diseases in the world and, while the ‘magic bullet’ cure has so far failed to materialize, there are new breeds of therapeutics, such as epidermal growth factor receptor (EGFR) inhibitors and vascular endothelial growth factor (VEGF) inhibitors, that are making a real impact on patient survival. However, improvements in survival come at a cost, and hefty increases in oncology drug prices are making life difficult for those agencies whose job it is to make reimbursement decisions.
The promises of unregulated pricing and the largest oncology market in the world have made the US the most popular entry point for new oncology drugs. Furthermore, products first authorized in a market outside the US, for example Iressa (gefitinib) from AstraZeneca (UK) and Erbitux (cetuximab) from ImClone Systems/Bristol-Myers Squibb (both US)/Merck KGaA (Germany), often subsequently experience difficult and lengthy passages through the US Food and Drug Administration (FDA) review process.
Another factor in the FDA’s favor is its facilitated review process for drugs considered to address an unmet clinical need. Gleevec (imatinib mesylate), from Swiss firm Novartis, obtained US approval in just twoand- a-half months as a late-stage treatment for Philadelphia chromosome-positive chronic myeloid leukemia in patients who failed to respond to standard therapies. US-based Millennium Pharmaceuticals’ Velcade (bortezomib) gained authorization as a thirdstage multiple myeloma therapy in just two months.
Future Determinants
Reimbursement rates and prices for oncology drugs in the US are increasingly being determined through evidence of enhanced patient survival rates. This is already evident from the decision by the Centers of Medicare and Medicaid Services (CMS) to exclude Iressa, which has no proven impact on patient survival among non-small cell lung cancer (NSCLC) patients, from Medicare Part D formularies. Drugs that are backed by evidence of improved survival rates are able to achieve significant price premiums over those that do not.
The promise of potentially life-saving oncology products has led to intense pressure being put on public reimbursement agencies to make their decisions as quickly as possible—in some cases before clinical efficacy has been proven.This year, the CMS agreed to provide coverage for the use of colorectal cancer drugs such as Eloxatin (oxaliplatin) from French firm Sanofi- Aventis, Erbitux, Avastin (bevacizumab; Genentech [US)/Roche (Switzerland)) and Camptosar (irinotecan; Pfizer (US)) in treating off-label indications in clinical studies authorized by the National Cancer Institute.
The same trend is evident among private insurers, with Blue Cross Blue Shield agreeing in March 2006 to reimburse Avastin for NSCLC patients, before a filing had even been submitted to the FDA for that indication. Commonly it takes several months after registration for the CMS to grant the code necessary for hospital outpatient reimbursement under Medicare.
Velcade, for example, obtained clearance for Medicare reimbursement five months after FDA approval had been granted.
However, outside the US, public reimbursement for high-cost oncology products is likely to be determined more by cost than by therapeutic advantage over existing therapies, and evidence of patient survival is no guarantee of reimbursement. An emerging technology report on Avastin by the Canadian Co-ordinating Office for Health Technology Assessment (CCOHTA) concluded that at C$44,000-55,000 (US$37,900- 47,400) for ten months’ use, public reimbursement of Avastin may not be justified, especially give that it has shown “similar” survival benefits to the FOLFOX chemotherapy regimen. Specifically this refers to Phase II trial results that showed that the FOLFOX regimen achieved 13.8 months as a median duration of survival while Avastin plus the Saltz regimen achieved 20.3 months in a phase III trial.

The Price of Survival
New oncology products, both biologics and small molecules, are among the highest-priced of all pharmaceuticals, and there is relatively little differentiation between the US and the EU. Nevertheless, the US remains the most liberal market for oncology drug reimbursement; the CMS at present covers all FDA-approved drugs, a trend followed by private insurers that do not want to appear lacking in comparison. Furthermore, the CMS has shown no signs of confronting oncology products in terms of price.
The price environment for niche products or those treating areas of relative unmet need—including oncology products—is benign at present. For those products demonstrating enhanced patient survival rates, the relative lack of effective alternatives means that manufacturers are able to achieve premium pricing and maintain that level without need for significant discounting.And with no generic drugs on the horizon for the need breed of cancer therapies the situation is unlikely to change in the near term.
However, the soaring cancer drugs bill will necessitate more direct management of oncology drug costs in the future. By the end of 2005, the US had approximately 11.5 million cases of cancer.The greater efficacy of new treatments is both expanding the patient population and ramping up average unit costs. According to pharmacy benefits manager Medco Health Solutions (2004 Drug Trend Report), increased use of just two new drugs, Iressa and Gleevec, drove a 10.7% year-onyear (y/y) hike in the average unit cost of cancer products in 2004 and a 13.7% spike in utilization rates.
Total spending jumped by 25% y/y, even before the impact of newer products such as Avastin, Erbitux, and Tarceva (erlotinib; Roche/Genentech (US)/OSI Pharmaceuticals (US)) is taken into account. Therefore, while the US system is designed to facilitate patient access to the newest and most effective forms of cancer therapy, there is no doubt that it is creating increasingly difficult challenges for payers—public and private alike.The CMS has already reacted to this with contentious reform of the way in which oncology products are reimbursed under Medicare, a process that began with the Medicare Modernization Act (MMA) of December 2003. The purpose of this, ultimately, is to contain the growth in cost of providing oncology care.
Rationalizing Costs
The old system determined reimbursement using the average wholesale price (AWP), but it represented a soft target as the AWP was set by manufacturers.With the net cost of cancer treatment set to continue rising, the emphasis in future will be on rationalizing the cost of providing such treatment wherever possible. Switching from using the AWP to using the average selling price (ASP) represents the first step in this direction.The ASP of a given product is calculated by dividing the manufacturer’s total revenue for the drug by the number of units sold—excluding certain sales, such as to the government.
Due to be phased in during 2006, the CMS is introducing third-party procurement for cancer products, taking it out of the hands of physicians and nurses. Although providers will retain the option to remain within the existing system that allows physicians to seek reimbursement for drugs they have acquired, the level of reimbursement will be the same rate as that given to the health plan’s contracted specialist vendor, making it likely that most oncologists will eventually drop the ‘buy and bill’ procedure. This will enable greater payer control and will remove the physician’s incentive to prescribe the highest-priced drug in a bid to boost profits. Ultimately, though, it is unclear whether this tactic, in itself, will have a significant impact on prices.

The nature of cancer has historically rendered it an area safe from cost containment, but cost issues are ensuring that what was once the unthinkable is already entering the mainstream, with insurers more willing to intervene in deciding the circumstances in which a particular drug can be used. Oncologists currently have freedom to prescribe as they wish—and do so freely, for example, in off-label indications. It is difficult to see this situation persisting. As the costs of drugs grow, health plans are more likely to seek ways of managing the use of products; relying on evidence of clinical effectiveness before agreeing to reimburse. Given that as much as half of oncology drug-use is off-label, this represents a significant risk to the volume of sales in the future.
For the time being, the outlook for oncology drug sales in the US remains positive, with the average unit price set to continue growing.The risk beyond the next two years is that the sector may become a victim of its own success; the impact of oncology products on drug price inflation will be scrutinized more closely, particularly as oncology is one of the few areas of the drug market that is actually experiencing significant growth. For this reason, it is reasonable to assume that oncology drug prices are now peaking. It will remain extremely difficult to restrict access to cancer products on grounds of cost alone, and so payers will have to look to alternative means of regulating spending. This is most likely to be through restricting coverage of drugs to indications in which products have proven efficacy, closing off some of the off-label market. ■

The Impact of Biosimilars in Supportive Care in Cancer

Biosimilars, which are copies of patent-expired large-molecule biologic drugs (Table 1),1–8 offer the same rationale as generic drugs. They can give patients, hospitals and healthcare systems the opportunity to expand patient access to care and offer potential budget savings to reinvest (Table 2).1,2,9 They are designed to be similar in effectiveness, safety and quality to […] 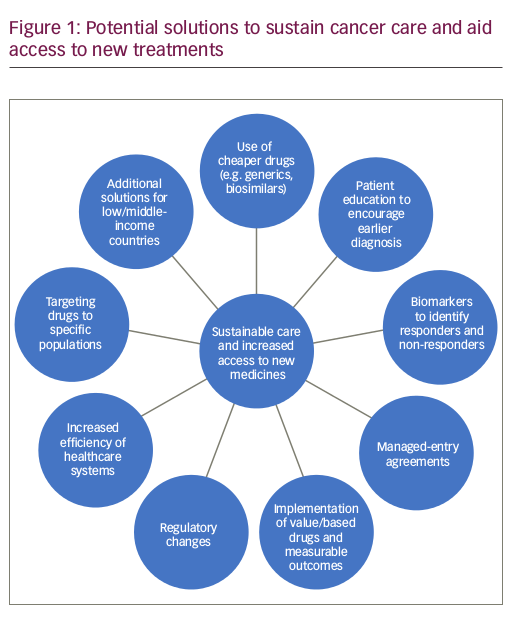 Potential Solutions for Sustaining the Costs of Cancer Drugs

Introduction With the growing burden of cancer, sustainable solutions are urgently required to ensure access to effective and safe treatments for all patients.1 Health expenditure on cancer in Europe more than doubled between 1995 and 2014, increasing from €35.7 billion to €83.2 billion;2 high-cost cancer drugs are the main drivers of this increase in many […] 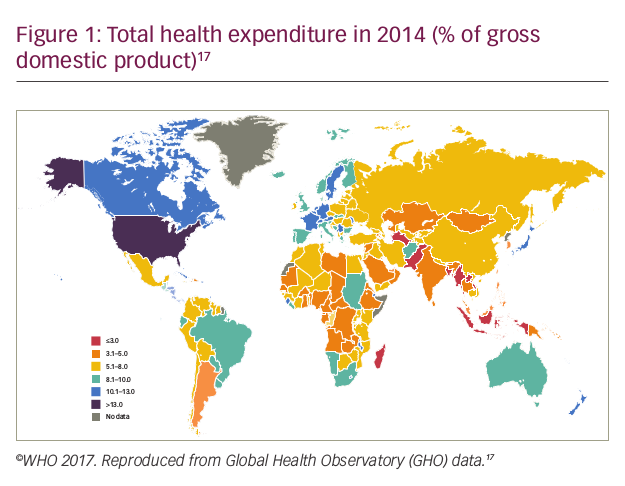 What Happens when the Cost of Cancer Care Becomes Unsustainable?

The estimated incidence of cancer increased by almost one third across Europe between 1995 and 2012, and this growth is predicted to continue.1,2 Compared with other diseases and disabilities, the lost years of life and productivity resulting from cancer represent a heavy drain on the global economy, especially in low- and middle-income countries, where the […]

The Impact of Biosimilars in Supportive Care in Cancer