Case report
A 63-year-old female of Mediterranean origin presented with a three-month history of tiredness, anorexia, 20-kg weight loss and one-month history of vague abdominal discomfort. She was referred to our centre after a computed tomography (CT) scan had revealed extensive intra-abdominal neoplasm along with tumour deposit in the liver and along the hepatic and renal capsules (Figure 1). A core needle biopsy of the omentum demonstrated a neoplasm composed of mixed spindle and epithelioid cytology. The spindle component showed interlacing fascicles of blend tumour cells with spindle nuclei (Figure 2). The tumour had a low mitotic index of < 5/50 high-powered fields (HPF). Immunostaining revealed a strong expression of CD117 (c-Kit), DOG1

(“Diagnosed on GIST-1”) and CD34, consistent with a diagnosis of GIST, mixed cellularity subtype.

As per current recommendations, the patient was initiated on imatinib mesylate, at a dose of 400 mg daily. During the second week of treatment, she developed progressive anorexia, nausea, vomiting, and loose stools. Fifteen days after initiation of imatinib, she presented to the emergency department with dyspnoea, hypotension, tachycardia and confusion. Laboratory tests (with pre-therapy baseline) revealed: Creatinine 527 (53) [22–75 μmol/L], pH <6.8 [7.33–7.46] with undetectable bicarbonate, lactate was 12.9 [0.4–2 mmol/L], potassium 5.8 [3.5–5.1mmol/L], phosphorus 3.04 (1.25) [0.81–1.58 mmol/L], 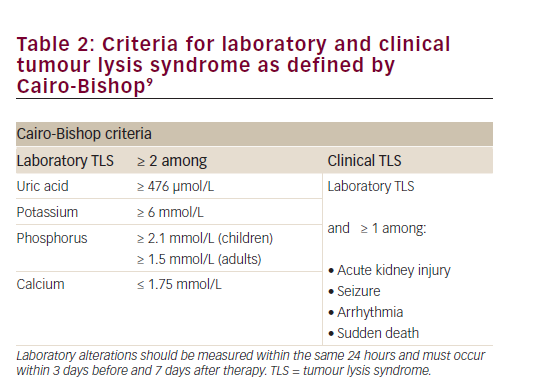 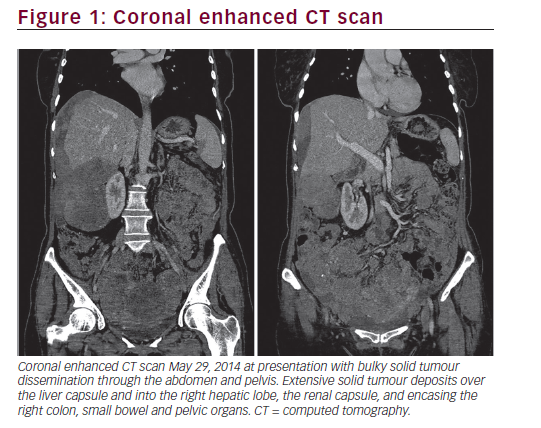 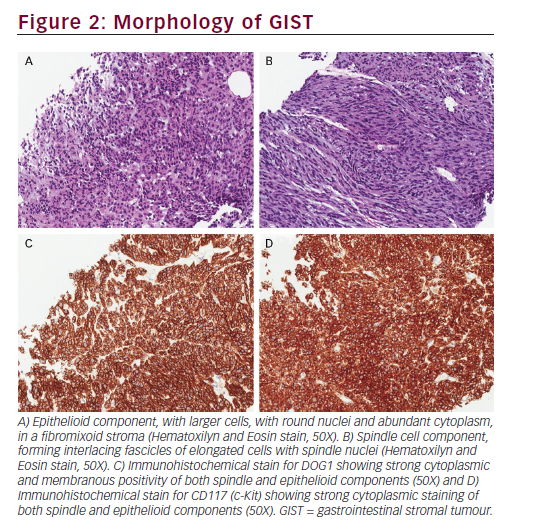 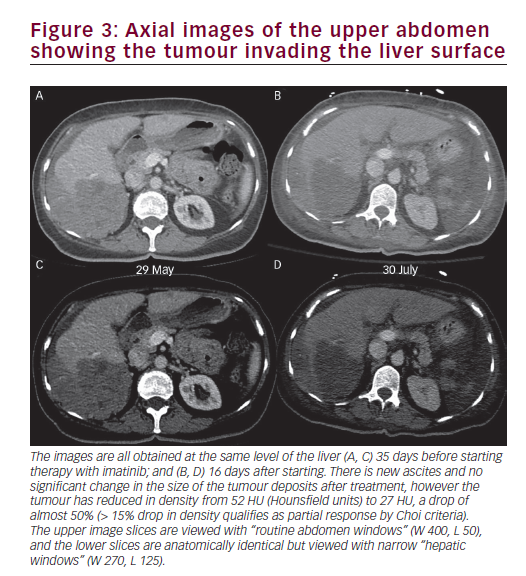 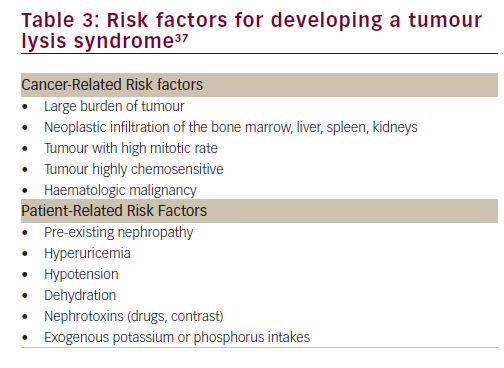 111 [115–155 g/L], and platelets 598 [130–380 x 109/L]. The patient underwent aggressive fluid resuscitation and was transferred to the critical care unit on vasopressor support, with the intent to initiate sustained low-efficiency dialysis (S.L.E.D.). Four hours after initial bloodwork and prior initiation of S.L.E.D., corrected calcium had decreased to 2.21 mmol/L, phosphorus had decreased to 2.83 mmol/L, and potassium had increased to 6.3 mmol/L. Calcium phosphate product went from 90.2 to 77.4 mg2/dL2. A septic workup, including chest X-ray, blood and urine cultures was negative. CT scan of the abdomen and pelvis performed the following day ruled out visceral perforation but did demonstrate clear evidence of tumour response with a decrease in tumour density by nearly 50%, meeting Choi criteria for partial response (Figure 3).10 Imatinib was held pending her improvement. 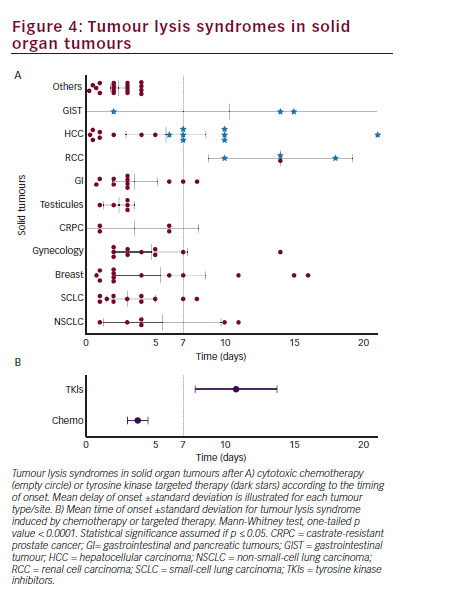 Dominick Bossé, E Celia Marginean, D Blair Macdonald, Garth Nicholas and Shailendra Verma have nothing to disclose in relation to this article. No funding was received for the publication of this article.
Compliance with Ethics: All procedures were followed in accordance with the responsible committee on human experimentation and with the Helsinki Declaration of 1975 and subsequent revisions, and informed consent was received from the patient involved in this case study