Mature cystic teratomas account for 30–45 % of all ovarian tumours. Malignant transformation of these tumours is rare with squamous cell carcinoma (SCC) being the commonest histological type. During a 24-year period (1986–2010) we identified six women treated for SCC arising in a mature cystic teratoma at our institution. Each case was reviewed retrospectively recording presenting symptoms, tumour markers, preoperative imaging, tumour stage, management and outcome. Durable responses are difficult to achieve but best treatment response was seen in a woman who had partial response to chemo-radiotherapy. Concurrent chemo-radiation may be considered for disease confined to the pelvis.

SCC in mature cystic teratomas is most commonly seen in postmenopausal women.4 There are no distinctive clinical features, tumour markers are often normal and pre-operative radiological diagnosis is difficult. Malignant transformation of an ovarian cyst is therefore difficult to predict, hence most cases are diagnosed postoperatively. 5 Tumours confined to the ovary usually have a better prognosis and fertility-sparing surgery is an option where appropriate.6 Conversely, patients with stage III or IV disease rarely survive five years.7

Our knowledge about these rare tumours is limited and based mainly on small case series and case reports and the optimal management of this condition is unclear. Whilst surgery is often performed initially, the appropriate adjuvant treatment following surgery is also unclear. The aim of this study is to present the experience of our centre in managing this rare tumour and review the key literature in this area. We hope this contributes to the evidence base and helps inform on the most appropriate management strategy for this rare type of tumour.

Patients and Methods
During a 24-year period (1986–2010) we retrospectively identified six patients treated for SCC arising in a mature cystic teratoma of the ovary at Velindre Cancer Centre, UK. We collected demographic and clinical outcome data from patient records and overall survival was defined from the date of diagnosis to the date of death. For each case we recorded patient characteristics, presenting symptoms, pre-operative tumour markers and imaging, tumour stage, treatment and outcome.

Results
The age range of patients at diagnosis was 42–65 years with a median age of 56 years (see Table 1). Five women presented with chronic abdominal/ pelvic pain whilst one presented with acute abdominal pain and vomiting. Four of the patients had ultrasound scans, two had CT scans and one had a MRI scan as their pre-operative imaging study. Only one patient in our series, upon CT scan, was suspected pre-operatively to have malignant transformation in a dermoid cyst. The other patients had a diagnosis of a complex ovarian cyst. Pre-operative CA-125 was measured in all patients and was elevated in four patients and normal in two. Four patients had imaging studies available for review and the maximum tumour dimension range was 10–15 cm with a median of 10 cm.

All six women underwent staging laparotomy and optimal cyto-reduction was achieved in only one patient (see Table 2). Two women had sub-total hysterectomies, one had a small bowel resection whilst another woman required a colostomy. None had lymphadenectomy as part of their surgical staging. One woman had stage IIC disease and was optimally debulked whilst the remaining patients all underwent surgical debulking but none achieved optimal cytoreduction. Of the patients who didn’t achieve optimal cytoreduction three had stage IIIc disease while the other two had stage IV disease. All patients had adjuvant carboplatin based chemotherapy and three women had paclitaxel and one had docetaxel additionally, as part of first-line chemotherapy. An example of a haematoxylin and eosin microscopic histology section from case 6 of an area of well-differentiated SCC arising in a dermoid cyst is shown in Figure 1. Discussion
Mature cystic teratoma of the ovary, often referred to as dermoid cysts, are benign and are one of the commonest ovarian tumours. They occur principally in premenopausal women with a mean age at diagnosis of 35 years.3 Malignant transformation of these tumours is rare and occurs in 0.17–1.4 % of cases.2,3 This usually occurs in postmenopausal women with studies showing a mean age of onset of 55 years,4 which compares well with the mean age of diagnosis in our patients. The average diameter of benign dermoid cysts is 6–7 cm2,3 while that of the malignant counterpart is 14 cm.4 The mean tumour diameter in our series is around 10 cm.

Measurement of serum tumour markers and imaging are two important elements in differentiating malignant from benign ovarian tumours. Our patients all had CA-125 levels checked pre-operatively and these were elevated in four out of six (67 %) patients in our series, which correlates well with a recent meta-analysis4 where 71 % of patients had elevated CA-125 levels. Higher CA-125 levels have been shown to be associated with adverse outcome;4 however, in our series the median survival was 12.5 months both for women with normal and elevated CA-125 levels. Other tumour markers have been reported to be elevated in the diagnosis of malignant transformation of mature cystic teratoma. Raised carcinoembryonic antigen (CEA) has recently been suggested as an important investigation when evaluating mature cystic teratoma. Raised CEA level has been demonstrated in a patient with adenocarcinoma in a mature cystic teratoma,8 but this was not checked in our patient series. Equally, an elevated CEA level has been reported as more useful than CA-125 and CA19-9 in the diagnosis of malignant transformation of mature cystic teratoma.7,8

Though secondary debulking surgery has shown sustained remission in some reports none of our patients were deemed suitable for this intervention.5 In contrast to a meta-analysis,4 which showed 42 % of patients having tumour confined to one or both ovaries, all the patients in our study presented with extra-ovarian spread. Five out of six (83 %) of our patients had stage III or IV disease at surgical staging and though all patients underwent primary surgery only one (17 %) achieved optimal cytoreduction. None of our patients vhad lymphadenectomy whilst omentectomy was done routinely. A recent study suggested that lymphadenectomy might confer a survival advantage for patients with advanced disease whilst omentectomy did not affect overall survival.4

Two women had pelvic radiotherapy after combination chemotherapy for disease confined to the pelvis without any apparent benefit. One died midway through her treatment while the other had disease progression while on treatment. One patient demonstrated partial response to chemo-radiation following progression during first-line combination chemotherapy and she survived for longest in our series. Though results of a meta-analysis suggest that radiotherapy might affect survival adversely and increase morbidity4 chemo-radiation has not been evaluated in this setting and might be an option. None of our patients were alive at two years from initial diagnosis, the median survival being only 12.5 months, which reflects the poor prognosis associated with extra-ovarian spread of these tumours. 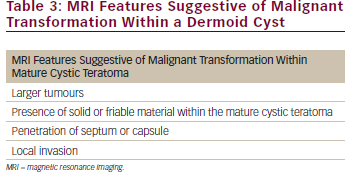 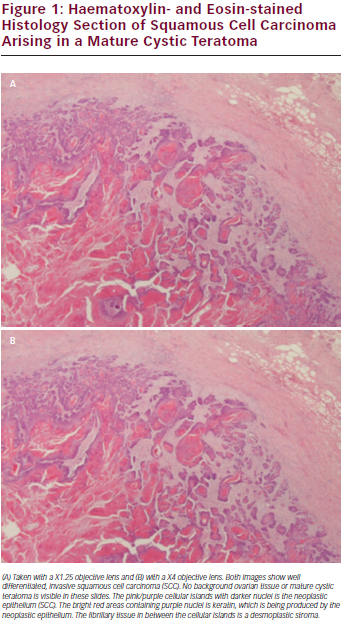 SCC arising from a mature cystic teratoma of the ovary is a rare malignancy and carries a very poor prognosis once the disease spreads beyond the ovary. Pre-operative diagnosis is difficult but MRI may be helpful in the diagnosis of malignant transformation. Tumour markers might be normal or only marginally elevated even in the presence of advanced cancer,
but some recent evidence suggests CEA level may be helpful when evaluating mature cystic teratomas. Certainly the possibility of malignant transformation should be considered in postmenopausal women with large tumours with solid components on magnetic resonance imaging. Optimal cytoreduction is difficult to achieve in advanced stage disease. Effective treatment and durable responses are, unfortunately, difficult to achieve in this condition but chemo-radiation may be of benefit in patients with localised pelvic disease, particularly as consolidation treatment after a response to first-line chemotherapy.

It is not by chance that this issue of European Oncology & Haematology is opened by an editorial from Suhag, dedicated to the oncological scenario in developing countries, warning that there is “little light at the end of the tunnel”. It is not by chance, because almost all the following papers report, and focus, on […]