Introduction: Thyroid cancer is the most common endocrine malignancy, and has shown an increase in incidence in recent decades. Fine-needle aspiration cytology (FNAC) is the mainstay of assessment of thyroid nodules and diagnosis of malignancy. Several reports have suggested that ultrasound (US) -guided FNAC has many advantages over palpation-guided biopsy. Methods: Comparison of results of thyroid nodule FNACs in a low volume thyroid center (Northumbria Health Care NHS Foundation Trust) performed by a diverse group of clinicians and radiologists involved in the management of thyroid nodules over 18 months, between October 2008 and April 2010, identified retrospectively from pathology records, with the results of surgeon-performed US (SUS) -guided FNACs performed by a single operator (SRA) recorded prospectively over 17 months between July 2013 and November 2014. Results: The study included 185 FNA, with 104 FNAC being undertaken between October 2008 and April 2010 compared to 81 FNAC between July 2013 and November 2014. There was a statistically significant reduction of non-diagnostic rates in the second period: 23/81 (28%) versus 51/104 (49%) (Fisher’s exact, p=0.0063), non-neoplastic (Thy2) scores remained comparable: 28/81 (35%) versus 32/104 (31%), there were more Thy3 results: 21/81 (26%) versus 15/104 (14%), while the proportion of neoplastic results in the SUS-FNAC group increased: 8/81 (10%) versus 6/104 (6%). Also, time to diagnostic FNAC was significantly shorter in the SUS-FNAC group: 24.2 ± 4.5 versus 54.9 ± 11.4 days (p=0.01, unpaired t-test). Conclusion: SUS-guided FNAC for thyroid nodules is a safe and simple technique. This study demonstrates that it leads to improved patient care by reducing inadequacy rate and time to diagnosis in a low-volume thyroid center.

Thyroid cancer is the most common endocrine malignancy, and has increased in incidence in recent decades.1–3 Fine-needle aspiration cytology (FNAC) is the mainstay of assessment of thyroid nodules and diagnosis of malignancy.4,5 Several reports have suggested that ultrasound (US) -guided FNAC has many advantages over palpation-guided biopsy. It is now generally recommended that thyroid nodules should be biopsied under US guidance to improve diagnostic accuracy (British Thyroid Association Guidelines for the Management of Thyroid Cancer 2014).6–8

It was apparent that insufficiency rates of thyroid FNACs were high in Northumbria Trust, leading to increased patient hospital attendance, anxiety, delay in diagnosis and treatment. These audits were undertaken to assess whether surgeon-performed US (SUS) guided FNAC could improve the adequacy rates of thyroid nodules FNAC and shorten the time to diagnosis in a low-volume thyroid center.

Methods
In the first period, the pathology department provided us with a list of all thyroids FNACs performed in the trust by a diverse group of clinicians 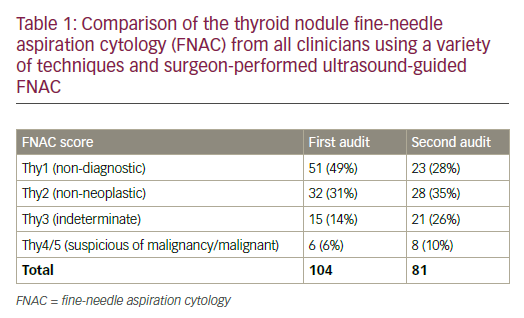 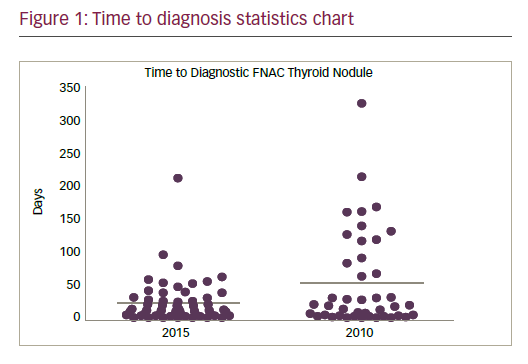 and radiologists from October 2008 to April 2010, and we retrospectively reviewed the case notes and clinic letters to ascertain other clinical information. The second period included only those FNACs carried out by a single surgeon (SRA) under US guidance from July 2013 to November 2014 and data were recorded prospectively.

In the first period, a diverse group of FNAC techniques were performed either free hand or under US-guidance, using needles of different calibres, with or without suction according to the preference of the clinician. In the second period a standard technique was employed using a Sonosite EdgeTM US system (FUJIFILM SonoSite, Inc., Washington, US) with 13–6 MHz transducer. FNAC was obtained using 21 G needle without suction, inserted into the nodule under US guidance with rotation and multiple passes (>10). Aspirates were expelled and smeared onto glass slides and air dried or fixed in alcohol prior to cytopathology analysis according to Royal College of Pathologists guidelines.10

The positive predictive value of a malignant cytology is 97–99%, as was shown in a report of 3,589 nodules from 2,587 patients evaluated and aspirated under thyroid US guidance.14 In this study, the predictive value of a malignant versus non-malignant cytological diagnosis was 97% and 99.7%, respectively. In a similar report of 4,703 FNAC samples, the sensitivity and specificity of thyroid FNAC for the diagnosis of malignancy were 94% and 98.5%, respectively.15 Hence, the accuracy and clinical utility of thyroid FNAC is excellent. However, Janczak et al. found that, based on 108 thyroid cancers resected with 66 FNA during a 20-year period, only 14 FNA biopsies (21%) revealed cancer, all of which were confirmed in the postoperative specimen, although six cases of FNA-diagnosed cancer revealed a different histological type postoperatively.16

In contrast, other studies found higher insufficiency rates of approximately 15–20% for percutaneous thyroid FNACs. The highest frequency of nondiagnostic cytology occurs in cystic nodules and in very small nonpalpable nodules.18,19 The diagnostic yield of sampling palpable nodules is enhanced when US-guidance is employed, especially when a nodule has 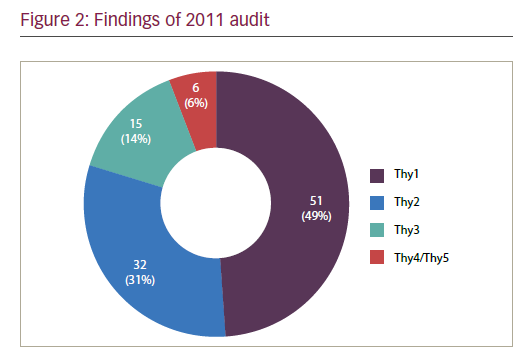 undergone cystic deterioration. If initial US-guided FNA is non-diagnostic, a repeat US-guided FNA will yield a diagnostic cytology specimen in 75% of solid and 50% of cystic nodules.18 If there is very sparse or no aspirated material, using a larger lumen needle may result in a satisfactory specimen.17 US guidance is preferred to palpation-guided FNAC, as the use of US improves the cytologic diagnostic accuracy rate and reduces the non-diagnostic rate.20–23 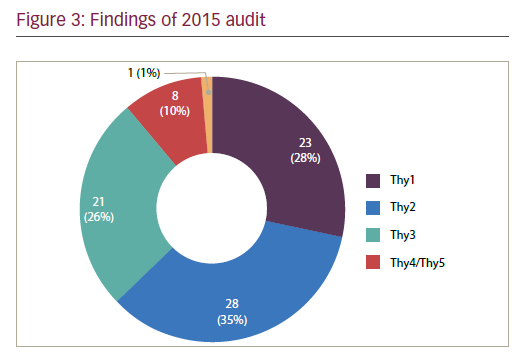 The following limitations were inherent in this study and may have biased the results. The first audit cycle demonstrated a very high rate of insufficiency in thyroid FNAC (higher than that reported in the literature) We think the reason our non-diagnosis rate was so high in the first period was that multiple clinicians were involved in performing a small number of thyroid FNAC, with or without SUS, in a low-volume thyroid center, which seems to lead to high non-diagnosis rate. Concentrating thyroid FNAC in the hands of dedicated, interested clinicians who audit their results seems to reduce our non-diagnosis rate and time to diagnosis. Although the second period did significantly improve the adequacy of FNAC, and shortened time to diagnosis, the inadequacy rate remained high (28%), suggesting that there is still considerable room for improvement. However, there were clear benefits to service delivery from the use of SUS FNAC. Results from the first period were collected retrospectively and so are inherently less accurate than the prospectively collected data from the second cycle. Thyroid nodules in the second period were referred to a surgeon for assessment, so may represent a different spectrum of pathology to those assessed by all clinicians in the first period. The surgeon may have sent potentially difficult cases to radiology for FNAC in the second period, thus biasing the results. The first period also included FNACs taken free hand, which has been shown to be inferior to US-guided FNAC.

Conclusion
Surgeon US-guided FNAC for thyroid nodules is a safe and simple technique. This study demonstrates that it leads to improved patient care by reducing inadequacy rate and shortens time to diagnosis in a low-volume thyroid center.

Compliance with Ethics: All procedures were followed in accordance with the responsible committee on human experimentation and with the Helsinki Declaration of 1975 and subsequent revisions.