In the Asia-Pacific region, the rate of cancer of the uterine cervix is high: it is second in order of prevalence after breast cancer. The prognosis of invasive cervical carcinoma is based wholly on clinical staging, which is not always able to predict the clinical outcome, especially for early-stage tumours. Abnormalities in the level of cytokine production have been found in invasive cervical carcinomas such as an increase of interleukin (IL)-6 production and a defect in interferon (IFN)-γ messenger ribonucleic acid (mRNA) expression in cancer patients. We have determined them to be concentrated and distributed directly at the tumour site. A correlation between cytokine expression and different clinical parameters such as tumour stage, lymph node status, human papillomavirus (HPV) expression, survival and disease-free interval were studied. This helped to better define the role of cytokines as prognostic markers in cervical carcinoma and identify high-risk cervical carcinoma patients for whom neoadjuvant chemotherapy or intensive therapy could be appropriate. Analysis of DNA adducts that index DNA damage and instability was also performed. These toxic biological end-points could be potential markers with implications in intermediate therapeutic management. HPV is known to be a major aetiological factor causing cervical cancer.1 Our studies reveal that 93% of the patients were positive for HPV infection and the most prevalent type was HPV 16. Other types found were HPV 18, 31, 33, 45, 52, 58, 66 and 68. Multiple HPV infection was also observed in 17.5% of patients.2

Macrophages and Dendritic Cells Infiltration
By using a dendritic cell (DC) Lamp – a marker for mature DC – it has been shown that most tumours contained mature DC located around the tumour, whereas immature DC appeared inside the tumour as evidenced by the staining character with CD1a antibodies. As observed in other cancers, this suggests a maturation block of DCs. During tumour progression, we observed an increase in the expression of MIP3α, a chemokine that preferentially attracts immature DCs and may explain the presence of these cells in the stroma. Our results, with a low percentage of T cells expressing IL-2Rα and compartmentalisation of DC subsets in the tumour microenvironment, are suggestive of a tolerant or anergic T-cell population. Role of Interleukin-17 in Tumour Growth Control
IL-17 is produced by memory CD4 T cells. It is a pro-inflammatory cytokine that induces the expression of IL-6, IL-8 and granulocyte colony-stimulating factor (G-CSF). Tartour et al. have shown that IL-17 promotes the tumorigenicity of human cervical tumours transplanted into nude mice. Indeed, two cervical cell lines transfected with a complementary DNA (cDNA) encoding IL-17 exhibited a significant increase in tumour size compared with the parent tumour following transplantation in nude mice. This effect is mediated in part by the secondary induction of IL-6 and is associated with a macrophage infiltration of the tumours.3 To assess the clinical relevance of this observation, IL-17 expression was reported in most cases and as expected was associated with the infiltration of CD4+ T cells. In immunocompetent mice, it was shown that IL-17 inhibits the tumour growth of an immunogenic tumour, whereas it exhibits either no activity or a protumoral activity against non-immuno-genic murine tumours. IL-17, similar to other cytokines IL-6, IL-10 and tumour necrosis factor (TNF)-α, could potentially affect both pro- or antitumour activity depending on the immunogenicity of the tumour.4

Interleukin 6 and 8 as Prognosis Markers
Two possible candidates with prognostic potential were identified in our studies, i.e. cytokines IL-6 and IL-8 secretion by tumour cells. IL-6 is a multifunctional cytokine mediating systemic and loco-regional alterations observed in cancer, such as tumour cell motility and decreased intracellular adhesion, whereas IL-8 has high angiogenic and metastic potential and increased levels have been implicated in several cancers. IL-6 positivity was found in both tumour and stromal cells, suggesting the existence of both autocrine and paracrine loop.5 Significant correlation between the stromal positivity of IL-6 with macrophages in the stroma tends to confirm the macrophages as one of the chief sources of this cytokine.6,7 IL-8 positivity was also found to be present in both tumour and stromal cells. While tumour cell secretion of these cytokines showed a poor prognosis, stromal cell secretion did not. This clearly indicates their secretion by stromal cells as a normal function whose levels get elevated during the growth of a tumour.8 Systematic evaluation of their levels in specimens collected during radiotherapy and post-treatment follow-up also reflected a similar trend and was indicative of residual or radio-resistant tumour. A leucopenic effect of radiation was also observed with a drastic fall in the expression levels of both CD4+ and CD8+ T cells.9

Decreased Levels of Both T Helper Cells 1 and 2 Cytokine
Realtime polymerase chain reaction (PCR) (Taq-Man) was used to measure the expression of IFNγ (Th1 cytokine), IL-4 (Th2 cytokine) and IL-17 (Th0 cytokine) in biopsies derived from invasive cervical carcinoma patients belonging to different clinical stages. We identified a group of cervical carcinoma patients with undetectable intratumoral T-cell-derived cytokine mRNAs as IFNγ, IL-4 and IL-17 expression in 5, 25 and 9 of the 52 biopsies, respectively. Global downregulation of type 1 and type 2 cytokines was observed in a subgroup of patients who more frequently presented advanced-stage tumours.10 Biopsies of patients with no IFNγ gene expression did not appear to be less infiltrated by T cells than control biopsies with measurable IFNγ gene expression.11 We have demonstrated the possible involvement of a newly described cytokine, IL-17, in the modulation of the growth of cervical carcinomas. This study further confirms the prognostic value of yet another two cytokines, IL- 6 and IL-8, as prognostic markers in invasive cervical carcinomas. It was also clearly demonstrated that in some clinical situations the decrease in intratumoral type 1 cytokines is not associated with a type 2 polarisation, but rather reflected global deactivation of T cells at the tumour site. These data provide support for immunotherapeutic approaches designed to reverse the anergic state of T cells in cancer.

Analysis of DNA Adducts in Invasive Cervical Carcinomas
DNA adducts represent an early, detectable and critical step in carcinogenesis, and thus may serve as an internal dosimeter of carcinogen exposure. Although relatively few studies have reported on endogenous DNA adducts compared with adducts from exogenous carcinogens, it is becoming clear that reactive intermediates (e.g. hydroxyl radicals) produced during normal physiological or pathophysiological processes continuously damage cellular macromolecules. These intermediates can also convert cellular constituents (e.g. lipids) to second-generation DNA-damaging species.12 A standard method used for measuring adducts from endogenous carcinogens in humans is the 32P post-labelling assay that has the advantage of high sensitivity, which allows the detection of 1/108–10 nucleotides and requires as little as 10μg of DNA. However, it does not allow adduct identification without authentic standards.13 To determine changes in oxidative and other DNA adducts during cervical cancer development, we analysed DNA from specimens collected from cervicitis/inflammation, biopsy-proven dysplasia and invasive cancer cases. Over 60 adducts were detected in cancer-free and cancerous tissues. Based on chromatography solvents and elution profiles, all adducts were classified into six groups. With the exception of the highly lipophilic L-2 adducts, which have been reported previously in the human cervix, all other groups of adducts are novel.

Similar DNA adduct profiles were detected in the normal specimens, dysplasia and cancer biopsies, each exhibiting at least six subgroups of adducts, P-1, P-2, PL-1, PL-2, L-1 and L-2, based on their descending polarity (or ascending lipophilicity). A known oxidative lesion 8-oxodeoxyguanosine (8-oxodG), formed predominantly, decreased progressively from the inflammation to dysplasia to invasive cancer. The progressive decrease was also evident for several adducts in both the P-1 and P-2 subgroups. Individual adducts in the PL-1 and PL-2 subgroups were either unaffected or exhibited progressive decline, but the clusters of adducts in the L-1 subgroup were practically unchanged. The most lipophilic adducts, the L-2 type, showed a progressive increase. The newly detected subgroups of adducts were up to 500 times higher than the previously known highly lipophilic endogenous I-compounds. In addition, some adducts in the P-1, P-2 and L- 2 subgroups correlated with the levels of infiltrating inflammatory cells, which are known to release free radicals. These observations may suggest a commonality in terms of oxidative DNA damage among infection, inflammation and the end-point malignancy in the uterine cervix. The level of 8-oxodG, which is implicated in several cancers, was high in chronically inflamed cervix. It is possible that this modification is an early event in carcinogenesis. The levels of bulky aromatic adducts of the PAH type were significantly higher in the invasive cancer group compared with normal and dysplastic cervix.14 This suggests their possible role in cervical carcinogenesis. In another study, we observed that there was a many-fold increase in these adduct levels during and post-radiotherapy in cancer cervix patients. This reflects the DNA damage caused due to radiation and a compromised state of the cell to fix the lesion. Identification of biomarkers that predict tumour formation and progression would drastically improve the current clinical scenario. Although these novel adducts are indicative of an association between inflammation and cancer, it has to be noted that this is a crosssectional study. Only further evaluation in a longitudinal study of these novel adducts, which show a significant quantitative change in disease progression, may prove their suitability for identification of high-risk subjects. The interplay between radiation exposure, oxidative stress and the biological consequences of exposure such as lethality and mutagenesis is intriguing. Measurement of DNA adducts holds promise not only in assessing the state of oxidative damage of DNA in cancer-sufferers, but also reflect the outcome post-radiotherapy. One principal application of DNA adduct detection to molecular epidemiology studies in humans may be assessment of carcinogenic risk.

The aim of modern radiotherapy is to optimise the probability of tumour control while minimising the unwanted acute or late radiation-induced damage on normal tissues. Detection and monitoring of DNA adduct levels in patients undergoing radiation therapy would reveal the patient response to radiation so that suitable interventions in terms of radiation dose is made for patients with radio-resistant tumours, but at the same time regulating the dose of exposure in radiosensitive patients. Furthermore, studies with larger populations would allow the majority of the cancer patients to receive optimised radiation and hopefully better tumour control. Our findings support the hypothesis that infections of the cervix lead to inflammation, and the release of ROS by endogenous factors leads to high oxidative damage to the DNA. Some of the modifications thus accumulated may lead to irreversible changes in the genome and initiate cancer.

One approach is to intervene in this process that involves interfacing infection, inflammation and oxidative damage. The bottom line is to prognosticate and stratify a response based on the marker profile for use on a routine basis in conjunction with other clinical parameters. In the management scenario, it may take several patient studies to develop a database. Nonetheless, the approach would potentially benefit the patient and make this technology viable point-of-care diagnostics.

This is an ongoing study. Parts of the data are taken from our earlier work with Indo-French and Indo-US research collaborations. 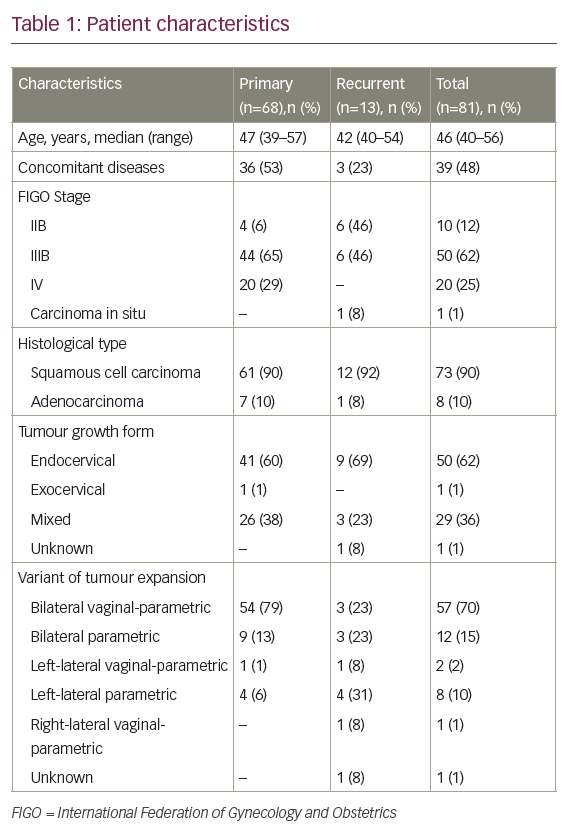 Cervical cancer (CC) is a leading cause of cancer morbidity in women globally. In Europe, epidemiological data on CC incidence shows important differences between countries: from 3.6 per 100,000 women in Switzerland to 28.6 per 100,000 in Romania.1,2 In 2015 in the Republic of Belarus, the morbidity and mortality rate from CC were 11.9 and […]