Esophageal cancer is one of the deadliest known cancers worldwide, and its incidence in the US is increasing over time. As per the Surveillance, Epidemiology, and End Results (SEER) data, it contributes to about 2.5% of all cancer deaths. Patients with esophageal cancer often present with an advanced stage disease where the prognosis is not very favorable. The typical symptoms at diagnosis are dysphagia and or odynophagia. Patients with adenocarcinoma may have previous or continued symptoms of gastro-esophageal reflux disease. By the time these symptoms occur, the disease is usually advanced, thus explaining the limited success in improving prognosis and overall survival. One of the reasons for early spread and late diagnosis is the fact that unlike most other gastrointestinal conduits, it lacks the serosa, and hence its high potential to spread relatively sooner. Another factor that negatively affects prognosis is the proximity of the esophagus to the vital structures like the airway and major vessels, and therefore the tendency of the cancer to directly invade them. The vitality of these structures is also a surgeon's major concern, and this sometimes jeopardizes the surgical approach and intervention while treating this cancer. The alarm symptoms in most cases precede the manifestations of advanced metastatic disease. Depending upon the location of the disease at different metastatic sites (usually lung and liver), in addition to the characteristic symptoms, this cancer may accordingly present with additional signs and symptoms. Whereas most patients present with typical symptoms such as dysphagia, weight loss and abdominal pain we herein report a patient whose primary presentation was left hemiparesis due to metastatic esophageal cancer to his brain. He did not report classical esophageal cancer symptoms prior to this neurologic presentation.

Esophageal cancer is one of the deadliest cancers, and its incidence is on the rise worldwide.1 In the United States, an estimated 16,980 cases of esophageal cancer were diagnosed in 2015 and 15,590 deaths are expected from the disease. With the latest advances in multimodality approaches, the five-year survival rate has risen only to a mere 17.9%.2 Two main types of esophageal cancers are commonly known, i.e., squamous cell carcinoma and adenocarcinoma, and these may have some similar and some different risk factors. Squamous cell type is the most common subtype worldwide, but in the US its incidence is declining whereas adenocarcinoma is now the most common type.1 The rising rate of adenocarcinoma in the US is thought to be due to corresponding high incidence of Barrett’s esophagus.3

The characteristic presenting symptoms of esophageal cancer are mainly dysphagia and/or odynophagia. Other symptoms may include, but are not limited to, chest or upper abdominal pain/discomfort, regurgitation, weight loss, loss of appetite, hematemesis, dyspepsia, hoarseness, chronic cough, vomiting, and cervical lymphadenopathy.10 Patients with a history of GERD may be found to have Barrett’s esophagus on routine follow-up, which further needs follow-up because of high risk for the developing

adenocarcinoma.11 Incidentally, asymptomatic or symptomatic localized intraepithelial neoplasia may also be found, which when detected has excellent prognosis as compared to the more advanced stages of this disease.12 At the time of presentation and diagnosis, the patient usually has at least one of the aforementioned symptoms, at least in the cases that we have seen in our experience. In at least 50% of cases, at diagnosis tumor has invaded/spread to nearby vital structures or metastasized, lung and liver being the most common locations.13 But the primary symptoms are always seen, and correlate with the T stage of disease, which is best assessed with an esophageal ultrasound (EUS).14

We report a patient who presented with advanced/stage IV esophageal cancer, with no local/upper gastrointestinal (GI) symptoms.

Case Report
A 68-year-old male presented with sudden onset of shaking and weakness of the left upper and lower limb. This was associated with occasional headaches for a few weeks. Patient had a history of type 2 diabetes and hypercholesterolemia. Considering his age and medical history, the most likely cause of that was suspected to be a cerebrovascular event. Upon further workup, a computed tomography (CT) scan of the head demonstrated a mass, and magnetic resonance imaging (MRI) scan confirmed a 1.6 x 2.1 x 1.8 cm mass in the right frontoparietal lobe with significant vasogenic edema(Figure 1). CT scan of the chest, abdomen, and pelvis was negative for any other masses. Referral to neurosurgery was done, and the mass was removed. The histology was conclusive for an adenocarcinoma. The tumor cells react with antibodies to cytokeratin 7, but not with antibodies to cytokeratin 20, prostate specific antigen, prostatic acid phosphatase and thyroid transcription factor-1 (TTF-1) (Figure 2). 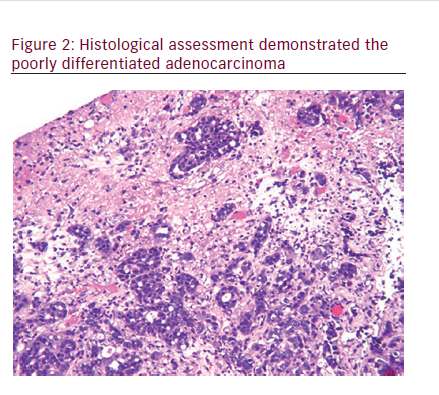 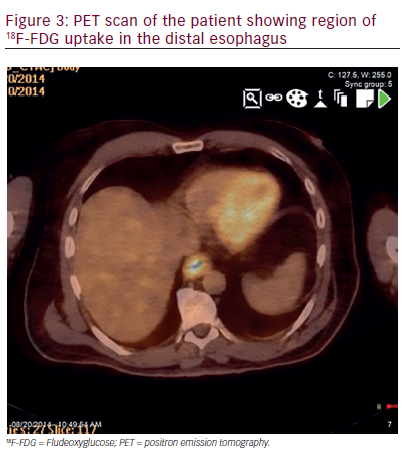 This antigen profile suggested origination of the primary tumor either within the lung or upper GI tract. The patient was scheduled for further oncological work-up. Post-operative staging, including CT of the chest, abdomen, and pelvis was unremarkable. Positron emission tomography (PET) scan showed an area of increased metabolic activity along the distal esophagus, which corresponded to a segmental esophageal wall thickening on CT (Figure 3). Endoscopy with esophageal ultrasound (EUS) detected a T3N1M1 primary tumor. EUS-guided cold-forceps biopsy of the mass, when compared to the brain metastasis, confirmed a HER-2 negative adenocarcinoma. Following neurosurgery for tumor resection, the patient had prolonged stay in the hospital because of post-operative 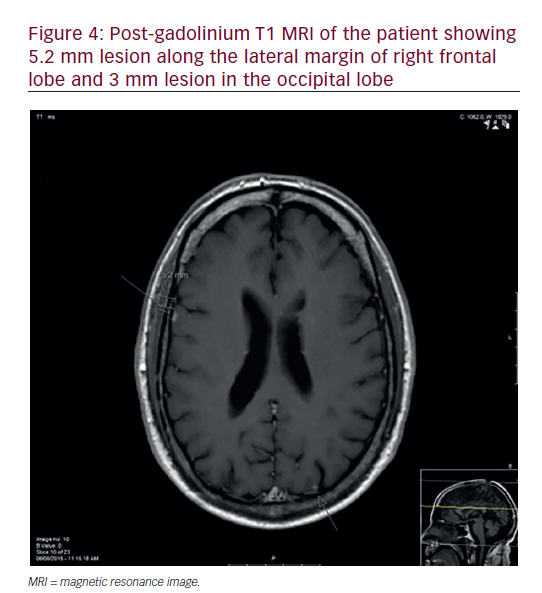 cerebral abscess. Subsequently, he received adjuvant cyberknife based hypofractioned radiotherapy in five treatments to the area of the resected tumor mass. Upon presentation to medical oncology, a repeat PET scan showed new lesions in retroperitoneum, liver and thoracic spine. Palliative chemotherapy with folinic acid + 5-FU + irinotecan (FOLFIRI) was chosen. Platinum based therapy was avoided in view of his already poor neurological status. He has yet to complain of dysphagia, odynophagia, chest pain, nausea, vomiting or other symptomology, otherwise typical of the disease that he has. Repeated MRI of brain in six months revealed multiple bilateral metastatic lesions and patient was referred for whole brain radiation therapy (WBRT) (Figure 4).

Discussion
Esophageal cancer presents as a highly lethal malignancy with a poor prognosis.21 Patients usually presents with typical symptoms of dysphagia and odynophagia, and may have associated dyspepsia, chest pain, hoarse voice, and other subjective upper GI symptoms. These symptoms engender a work-up, especially if the patient has a history of heavy smoking or and drinking, old age, history of gastroesophageal reflux disease (GERD), associated unintentional weight loss, and thus help us suspect and find or rule out an esophageal etiology.

However, as seen the aforementioned example, esophageal cancer may present with atypical symptoms, such as those suggestive of cerebrovascular accident (CVA). Esophageal cancer may remain undiagnosed until it becomes metastatic/Stage IV disease, and may show up as a different presentation altogether, depending upon the location of the metastatic focus/foci. Liver, lungs, bone, and adrenal glands are the most common sites of distant metastases in patients with esophageal cancer, while incidence of brain metastasis is 1.5%.20

Metastatic brain tumors account for approximately 20–40% of all intracranial masses in adults. Their common clinical manifestations are gait disturbances, altered mental status or personality changes, and focal neurologic deficits.19 Brain metastasis as the presenting form of esophageal cancer are highly uncommon and have been found in only 1.7–3.6% of patients with different types of esophageal cancer.15–17 In the United States, adenocarcinoma is the most common pathologic type of the brain metastasis from esophageal cancer. Surgery with or without WBRT presents the most common treatment modality. The median survival time from the diagnosis of brain metastasis was eight months with median patient age >60 years.18

Patients with advanced age may have several comorbidities and are at high risk for GI cancers. As learned from this case, a stroke like presentation may be a complication of metastatic disease from a GI primary and esophageal cancer can present in this fashion as symptomless primary disease. Follow up of stroke or any functional brain disease should include proper imaging and pathological studies to find out the cause, keeping cancer of the esophagus/upper GI tract as one of the causative possibilities.

The case reported in the present study is exceptional due to the absence of typical esophageal disease symptoms. It remains a subject of discussion as to whether there is a particular variety/subtype of esophageal cancer that has a potential to present this way, or if this is just one of those rarest cases.

Lilit Karapetyan, Gurvinder S Bali, Mark Cohen, and Michael K Gibson have nothing to declare in relation to this article. No funding was received in the publication of this article.

Fungal laryngitis is an uncommon condition. The exact incidence is not well defined as very few cases have been reported in the literature. Candida is the most common pathogen involved, with Aspergillus species coming in second.1–3 Other rare causes of fungal laryngitis such as cryptococcosis, blastomycosis, and histoplasmosis have also been reported.4,5 This case report […]

The term hyperfractionated radiotherapy (HFR) is used when radiotherapy is delivered in doses below 1.8-2.0 Gy per fraction. The rationale for doing so can be found in the differences in intrinsic radiosensitivity between tumours and late responding normal tissues. A small dose per fraction will tend to increase the therapeutic ratio between tumour and critical […]

Trending In Head and Neck Cancer: