Neuroendocrine tumours (NETs) are rare and heterogeneous neoplasms that can present with functional syndromes due to the hypersecretion of peptides. Somatostatin analogues (SSAs) have been used since the 1980s for the treatment of neuroendocrine tumours, with the aim of controlling the symptoms of functioning tumours and improving patients’ quality of life. Data from preclinical studies offer evidence of both direct and indirect mechanisms by which SSAs can exert antitumour effects. The activation of somatostatin receptors by SSAs leads to the activation of phosphotyrosine phosphatases, which control downstream apoptotic and antiproliferation signalling pathways. Also, the suppression of secretion of several growth factors and inhibition of antiangiogenic activity by SSAs indirectly inhibits tumour cell proliferation in vitro. Previous uncontrolled studies had shown tumour shrinkage and disappearance in response to the SSA octreotide. Recent results from the randomised and placebo-controlled PROMID trial have demonstrated that octreotide has antitumour activity in patients with metastatic mid-gut NETs. This article examines recent data providing evidence of the antitumour activity of somatostatin analogues.

Neuroendocrine tumours (NETs) are rare neoplasms that arise from neuroendocrine cells which are present throughout the body. NETs may be classified as functioning or non-functioning and are further differentiated based on the site of primary origin, histologic grade (low, intermediate or high) and proliferation rate.1 Functioning NETs are characterised by excessive hormone production and release, and cause hormonal syndromes (outlined in Table 1), while non-functioning NETs are not associated with a distinct hormonal syndrome – although they can secrete hormones and peptides at subclinical levels. Approximately 60–70 % of NET patients are diagnosed with disseminated metastatic disease.2 Even though many patients have indolent disease, some patients present with overtly aggressive tumours. Due to this heterogeneity, treatment is often individualised and may involve several modalities, such as cytoreductive surgery, non-surgical liver-directed therapies, somatostatin analogues, chemotherapy and, more recently, targeted agents.3 These treatments are used with two major objectives: to control the symptoms of hormone hypersecretion and to control tumour growth. The aim of this article is to review the antitumour effects of somatostatin (STS) analogues in the treatment of NETs.

STS is a cyclic peptide. Its two biological molecular forms are somatostatin-14 (S-14) and somatostatin-28 (S-28), which are both expressed throughout the GI tract. STS is synthesised as part of a large precursor molecule that is cleaved, enzymatically processed and released by endocrine and nerve cells.9 STS binds to five different STS receptor subtypes (numbered 1–5) present at the surface of different endocrine cell types.

The publication of this article was funded by Novartis. The views and opinions expressed are those of the authors and not necessarily those of Novartis. 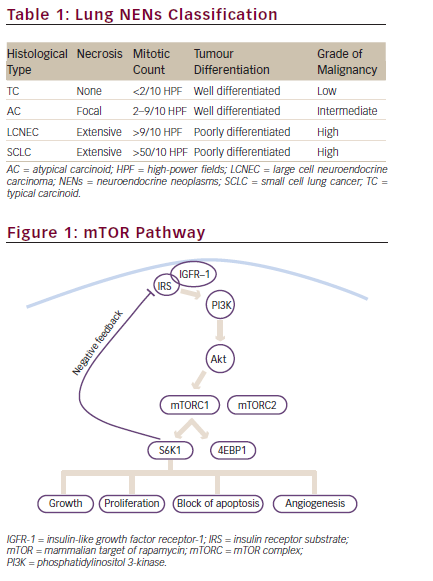 Neuroendocrine neoplasms (NENs) are a group of rare and heterogeneous malignancies that arise from neuroendocrine cells in most organs of the body. The presence, rather than absence of symptoms due to neuropeptides or hormones hypersecretion, distinguishes NENs in functioning and non-functioning tumours, respectively. The term NEN is used to denote any type of neuroendocrine malignancies, […]

Octreotide – A Review of its Use in Treating Neuroendocrine Tumours

Neuroendocrine tumours (NETs) is a collective term for a diverse range of neoplasms that arise from cells that originate in the endocrine and nervous systems and share common morphological and immunohistochemical features, including the presence of secretory granules. These tumours can secrete a variety of neuropeptides, which may or may not cause characteristic hormonal symptoms […]

Pancreatic neuroendocrine tumours (pNETs), also known as islet cell tumours, arise from the pancreatic islet of Langerhans and can be divided into functioning and non-functioning tumours based on whether they are associated with hormonal syndromes caused by excess hormone or peptide secretion. Functioning pNETs can be responsible for a variety of clinical syndromes: Zollinger-Ellison syndrome […]