Radium223 is approved for symptomatic castration-resistant prostate cancer patients with osseous involvement. Selecting patients and defining sequence strategies are challenging, with the limited available data, but there is a trend toward greater impact in higher volume disease. Combination and/or consolidation strategies for Radium223 will be of significant interest as data emerge from ongoing trials.

After the Food and Drug Administration (FDA) approved docetaxel for metastatic castration-resistant prostate cancer (mCRPC) in 2004, there were limited advances until 2010, when sipuleucel-T marked the first in a series of FDA approvals. Following the addition of immunotherapy (sipuleucel-T), advanced androgen receptor-targeted agents (abiraterone acetate [AA] plus prednisone in 2011 and enzalutamide in 2012), and a new chemotherapy agent (cabazitaxel in 2011), Radium223 received FDA approval for treatment of mCRPC in 2013. The approval was based on the ALSYMPCA trial,1 in which men with symptomatic osseous metastases from mCRPC who had already received, or were not candidates for, docetaxel were randomly assigned to Radium223, 50 kBq/kg intravenous (IV) once per month, or placebo for six doses. Unlike prior radiopharmaceuticals samarium and strontium, Radium223 treatment was associated with a survival advantage in addition to its palliative benefit.

Classification of prostate cancer is evolving as new therapies are approved. The approval of sipuleucel-T led to a new classification of “asymptomatic or minimally symptomatic,” while registrational trials for abiraterone and enzalutamide divided mCRPC according to docetaxel exposure status. The ALSYMPCA data added visceral metastases as an important qualifier. A rough decision tree is depicted in Figure 1.

Faced with multiple options, we must now determine which treatment will best meet the needs of an individual patient at each treatment changing time point. Emerging data sets have answered some questions regarding the positioning of Radium223 in mCRPC treatment paradigms, though knowledge gaps remain, as summarized below. 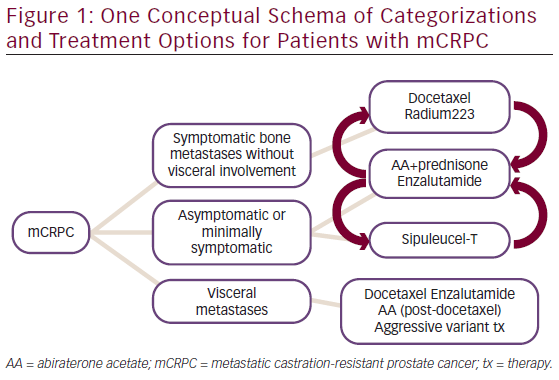 which persisted for 13 weeks after completion of the sixth dose of Radium223. Nonhematologic toxicities were similar, although there was more nausea (40 versus 30 %) and vomiting (24 versus 11 %) for docetaxel-pretreated compared with non-pretreated patients.

Radium223—Can It Be Used Together with Other Life-extending Metastatic Castration-resistant Prostate Cancer Agents?

In ALSYMPCA, “best supportive care” was allowed for both treatment arms, including ketoconazole, androgen receptor antagonists (bicalutamide, flutamide, or nilutamide), estrogen, and continuation of luteinizing hormone-releasing hormone (LHRH) therapy. In the expanded access program, a subset of 25 patients received concurrent AA or enzalutamide, and no excess adverse events were noted.3 When Radium223 was administered with abiraterone or enzalutamide, 40 % experienced treatment-related adverse events compared with 36 % for the entire study population. The combination of Radium223 with docetaxel at a reduced dose of 60 mg/m2 is also being studied, and has been reported to be safe, with early suggestion of better prostate-specific antigen (PSA) control compared with treatment with docetaxel alone.4 This type of multimodal approach has appeal, especially when faced with patients who have both symptomatic osseous metastases and visceral or even relevant pelvic soft-tissue involvement, but we do not yet know if combination therapy is advantageous. Ongoing prospective randomized clinical trial data from both industry-sponsored and investigator-initiated trials are awaited to answer this important question.

Should We Use Radium223 Earlier in the Disease State or with Lower Volume Disease?

Given that median overall survival can be >30 months based on predocetaxel studies such as PREVAIL,5 reduced myeloid reserve could affect future chemotherapy administration. Also, the concern for secondary malignancy risk is greater when applying Radium223 earlier in the disease process. Limited data derived from ALSYMPCA suggest that docetaxel can be given in full doses without excess toxicity after Radium223 administration6; however, there are no data about a second course of docetaxel or administration of cabazitaxel in such patients. The follow-up data from ALSYMPCA have failed to reveal excess secondary malignancy, but are still relatively short term, with a median follow-up of less than 1 year.7 More data related to longterm consequences would be helpful before moving Radium223 forward into patients with longer life expectancies. Furthermore, the subgroup analyses from ALSYMPCA, taken as a whole, point toward greater benefit in patients with higher disease burden, recognizing the serious limitations of subgroup analyses. Specifically, lower volume disease (less than 6 bone metastases) and lower alkaline phosphatase (<220) trended toward less benefit from Radium223.1 Lower numbers of events could explain the discrepancies, but for now these factors warrant consideration when evaluating whether a patient will benefit from Radium223.

With multiple available life-extending therapies for mCRPC, many with palliative benefits in addition to survival benefits, questions persist regarding optimal sequencing. We know that the biology of prostate cancer changes at the time of castration resistance, and that pain is a negative prognostic indicator, suggesting some potential biologic change differentiating asymptomatic from symptomatic mCRPC. Alleviating cancer-related pain is a particularly important goal in the management of mCRPC, and the high rate of palliation achieved by Radium223 is a primary driver of my decisionmaking about when to add treatment with Radium223. Ongoing trials will likely provide further insights regarding combination versus sequential or consolidative strategies, and ultimately we seek guidance to better individualize our therapeutic approach to mCRPC patients.

Tanya B Dorff, MD, has participated in promotional speaking for Bayer, Astellas, and Sanofi, and has provided consultancy to Dendreon. No funding was received in the publication of this article.

Prostate cancer is one of the leading causes of cancer death worldwide.1 However, the emergence of novel hormonal therapies and the increasing availability of sensitive next-generation imaging techniques, such as gallium-88 prostate-specific membrane antigen (PSMA)-targeted positron emission tomography (PET), has transformed the management of advanced prostate cancer. Numerous agents, including abiraterone, enzalutamide, apalutamide, darolutamide, docetaxel, cabazitaxel, […]