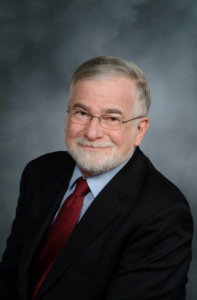 Andrew I Schafer received his MD from the University of Pennsylvania, completed his internal medicine residency at the University of Chicago, and his fellowship in hematology at the Brigham and Women’s (formerly Peter Bent Brigham) Hospital. He rose to the rank of Associate Professor of Medicine at Harvard Medical School before moving to Houston in 1989 to become Chief of Medicine of the Houston VA Medical Center and the W.A. and Deborah Moncrief, Jr. Chair of Medicine at Baylor College of Medicine. Here, he was appointed The Bob and Vivian Smith Professor and Chairman of the Department of Medicine at Baylor as well as Chief of Medicine at The Methodist Hospital. In 2002 he returned to his medical school alma mater as the Frank Wister Thomas Professor and Chairman of the Department of Medicine at the University of Pennsylvania. From 2007–13 he was the E. Hugh Luckey Distinguished Professor and Chairman of the Department of Medicine at Weill Cornell Medical College and Physician-in-Chief of the New York Presbyterian Hospital-Weill Cornell Medical Center. In August 2013, Dr Schafer was appointed to his current position as Director of the Richard T. Silver Center for Myeloproliferative Neoplasms (MPNs) at Weill Cornell Medical College.

Before the 61st American Society of Hematology (ASH) Annual Meeting & Exposition 2019 we caught up with Dr Schafer to discuss recombinant interferon-α in the reduction of thrombotic events in patients with polycythemia vera.

What are the known risk factors for thrombotic events in patients with polycythemia vera?

Patients with polycythemia vera (PV) are well known to be at risk of thrombosis simply as a function of the increased blood viscosity that results from a high red blood cell count. In fact, the higher the hematocrit and red blood cell count are in a PV patient, the higher the risk of thrombosis. This is why it is so important to attain and then maintain normal red blood cell values (optimally a hematocrit of 45% or lower) in these patients. However, we know that increased whole blood viscosity cannot be the only explanation. People living at very high altitudes often have hematocrits that are higher than 70% in order to compensate for the environmental hypoxia without an increased risk of thrombosis. The same is true for individuals with other secondary polycythemias, such as polycystic kidney disease, primary lung disease, or cyanotic congenital heart disease. We now know that genomic status can be a determinant of thrombosis risk. For example, PV patients with janus kinase 2 (JAK2) mutations are at increased risk and those with calreticulin (CALR) mutations are at decreased risk of thrombosis. An important clue to a possible mechanism is that the red cells of specifically JAK2 mutation-positive individuals adhere more avidly to vascular endothelial cells. Other clinical factors that increase thrombosis risk in PV patients are advanced age, previous history of thrombosis, sustained leukocytosis, and cardiovascular risk factors.

What is the current standard of care for patients with polycythemia vera?

The goals of treatment are the same for all hematologists who manage patients with myeloproliferative neoplasms (MPN): try to prevent progression of disease to myelofibrosis or acute leukemia, try to prevent complications of the disease such as thrombosis and vascular events, and maintain a good quality of life. However, there is still some controversy about the best way to achieve these. There is little argument about the need to maintain normal red cell values. Although it has been argued that red blood cell count should be the parameter to follow, the only data available targeted a hematocrit of 45 or less to prevent thrombosis. It is likewise generally agreed that patients should take daily low-dose aspirin unless there is a contraindication to do that. When blood cell cytoreduction is needed, the first line treatment is hydroxyurea or pegylated interferon. Ruxolitinib has been approved for use in PV patients who have failed hyroxyurea (either because of ineffectiveness or intolerance). It should be particularly considered in those with splenomagely and systemic symptoms. Hydroxyurea is still considered to be leukemogenic by some hematologists, and therefore many patients, but most recent data in populations of PV patients have shown that its leukemia risk is not significantly higher than leukemia development in PV without the use of hydroxyurea. Pegylated interferon is associated with some risk of exacerbating or exposing for the first time clinical autoimmune disease, and also should be used with extreme caution (or not at all) in patients with psychiatric problems. However, it is the only drug available at this time that clearly targets the mutated MPN stem cell. It is also unquestionably the drug of choice in pregnant women. Ruxolitinib has been associated with the development of aggressive lymphomas, but only in those who had evidence of clonality by flow cytometry before starting the drug. Therefore, I usually order blood flow cytometry for lymphocyte immunophenotyping before starting ruxolitinib. Allogeneic stem cell transplantation is reserved for PV patients in transformation to myelofibrosis or leukemia if they meet other requirements for the procedure.

What was the impact of first-line interferon-α, hydroxyurea and phlebotomy-only therapy on thrombosis risk, and what are the implications of these findings?

Support: No funding was received in the publication of this Insight article.