In anaplastic lymphoma kinase (ALK)-rearranged non-small cell lung cancer, brain metastases occur in 22–33% of cases at diagnosis and could reach up to 70% after crizotinib failure. Next-generation ALK inhibitors (ngALKi) have superior intracranial activity and prolonged responses compared with crizotinib and chemotherapy, as was shown in treatment-naïve or crizotinib pre-treated patients, irrespective of prior brain irradiation. Nevertheless, central nervous system relapse is also seen with ngALKi. Tailored treatment is necessary to obtain long-term survival without detrimental effects on cognition. Possible options include profiling secondary mutations to select sequential ngALKi, stereotactic radiotherapy and/or surgery, with the aim to avoid/deter whole brain irradiation.

At initial diagnosis of metastatic disease, central nervous system (CNS) metastases are present in 22–33% of patients with anaplastic lymphoma kinase (ALK)-rearranged (ALK+) non-small cell lung cancer (NSCLC). After crizotinib failure, the incidence can reach up to 70%, compared with 40% in all comers.1 The presence of CNS disease is an indicator of poor prognosis in NSCLC and is associated with a lower quality of life compared with metastasis in other organs. Therefore, optimal treatment, or even prevention of CNS disease, is important. Next-generation ALK inhibitors (ngALKi), including second-generation ALKi (alectinib, ceritinib, brigatinib) and the third-generation ALKi (lorlatinib), have increased potency and higher CNS activity compared to the first-generation ALKi, crizotinib.1 In this editorial, we will discuss the management of patients with ALK+ NSCLC with CNS metastases, with a special focus on the activity of ngALKi.

First-generation versus ngALKi in the prevention of CNS disease

NgALKi have higher intracranial activity compared with chemotherapy or crizotinib.4–6,8–12 CNS responses occur early, starting from the first evaluation scan,13 and are durable. The duration of response under ngALKi can reach more than 1 year in crizotinib-naïve patients. Importantly, ngALKi are effective also after crizotinib failure, with intracranial overall response rates (ORR) ranging from 27–87% and a median duration of response of several months (Figure 1). After failing at least two lines of ALKi, the third-generation ALKi, lorlatinib, achieved an intracranial ORR of 53% and an intracranial median duration of response of 14.5 months.14 This impressive activity in heavily pre-treated patients is due to the retained potency of lorlatinib to acquired resistant mutations under prior ALKi (including ALK G1202) and because of its better capacity to penetrate into the CNS (CSF drug concentrations of 75% of plasma levels).14,15 The ASCEND-7 study (NCT02336451), which has been specifically designed to assess the CNS response under ceritinib, has also evaluated leptomeningeal disease. This cohort of patients (n=18) was crizotinib pre-treated in 89% of cases and had prior radiotherapy in 61% of cases. The median PFS was 5.2 months and the median overall survival 7.2 months, longer than that established in patients with historical NSCLC (1–3 months).16 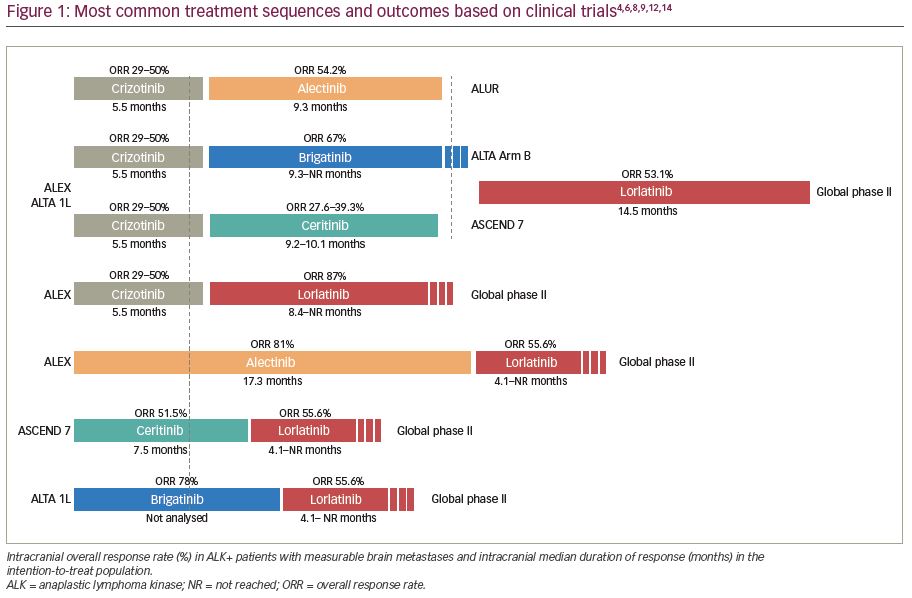 Importantly, data from the above-mentioned clinical trials are not comparable because of different inclusion/evaluation criteria (Table 1). 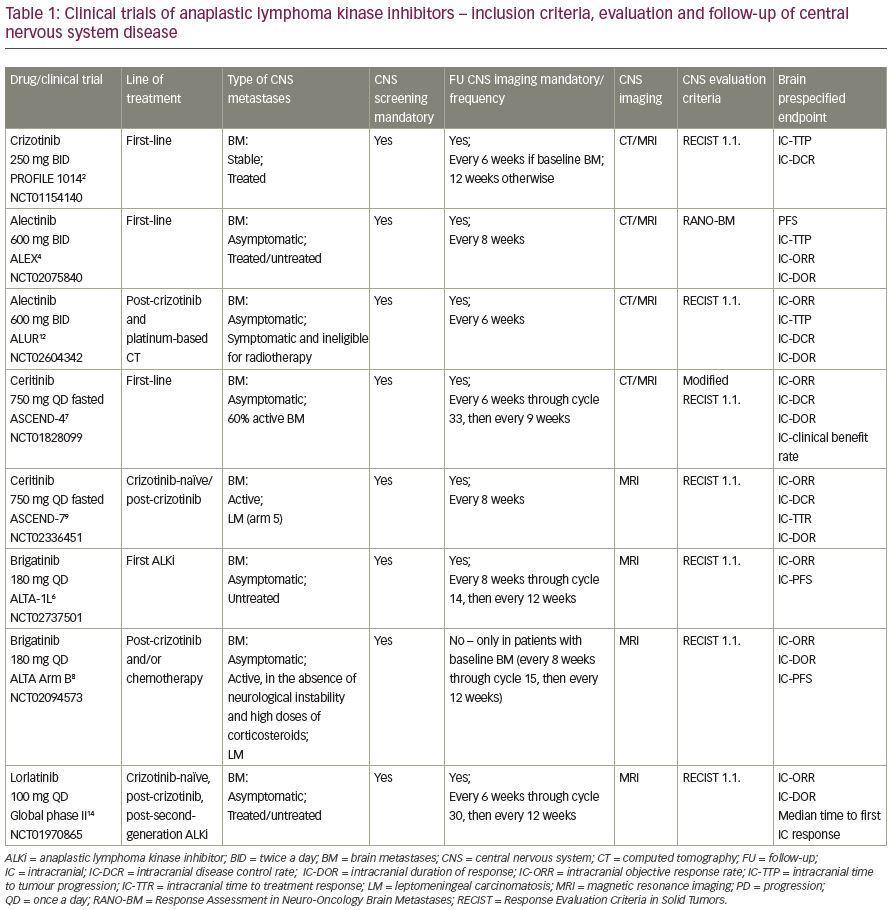 Despite an increase in intracranial activity of ngALKi, CNS disease will often eventually relapse. The sequential use of the third-generation ALKi, lorlatinib, after second-generation ALKi was successful in a global phase II trial (NCT01970865).14 There are currently no clinical trials evaluating a sequential approach between different second-generation ALKi. This might be justified, considering that second-generation ALKi have different ‘sensitivity’ profiles, according to resistance mutations.1 Thus, a molecularly guided approach tailored to secondary mutations could earn additional treatment lines and also increase the chance of obtaining a CNS response. Another situation that could be encountered is the development of isolated CNS progression, a frequent phenomenon with crizotinib, that could also occur with ngALKi.17 For example, in the ASCEND-4 study evaluating first-line ceritinib versus chemotherapy, 48% of patients failing ceritinib developed isolated CNS progression.7 Isolated CNS progression occurs as either a consequence of resistance alterations or insufficient drug penetration. In the latter case, there may be a retention of sensitising alterations.17

The distinction between these two causes of isolated CNS progression would better guide the treatment sequence between alternate second-generation drugs and third-generation drugs or the use of local therapies, such as cranial irradiation. However, performing a molecular profile in patients with isolated CNS progression is challenging, as it should be performed in CSF rather than in plasma. Plasma circulating tumour DNA is negative in ≥50% of cases of isolated CNS progression, depending on the performance of the technique.17 In the absence of resistance alterations, an insufficient drug concentration in the brain might be responsible. However, currently there are only scarce data in several patients that investigate ALKi concentrations in the CSF, and there are no CSF penetration data on ALKi dose escalation.9,15,18 For alectinib dose escalation (900 mg twice daily), intracranial responses have been described in two patients with leptomeningeal disease progression under standard dose of alectinib.19

Switch to another ngALKi might avoid or defer cranial irradiation

The availability of effective systemic treatments for sequential use could thus lead to deferring, or even avoiding, whole brain irradiation, which would spare patients the long-term neurocognitive radio-induced side effects. ALK+ patients are usually young, with a long median overall survival of 6.8 years from diagnosis of stage IV disease.20 Similarly, long-term effects of stereotactic radiotherapy, such as radionecrosis, could be seen more frequently. Therefore, anticancer strategies should aim to prolong each line of treatment, without adding significant toxicity. For this purpose, when isolated CNS progression relapse is amenable to local treatment, stereotactic radiotherapy or surgery are usually employed, while continuing the same ALKi. As the incidence of radionecrosis is related to the tumour size, stereotactic radiotherapy should not be delayed too much. It may be interesting to identify patients who will eventually develop early subsequent extra-CNS progression and who might benefit more from a tyrosine kinase inhibitor switch rather than a local treatment. In isolated CNS progression, a positive liquid biopsy might predict subsequent extra-CNS progression, but these data should be validated in prospective studies.17

Due to the availability and performance of ngALKi, patients can have long-term survival despite the presence of brain metastases.20,21 We hope to witness even more rapid improvement in their management as other promising options are being investigated. These include the addition of bevacizumab in the NCT02521051 trial, novel drugs with promising early CNS efficacy data such as entrectinib (NCT03994796, NCT02568267) or ensartinib (NCT03753685), proof of principle studies in patients who will undergo surgery (e.g., NCT02605746), a new lorlatinib trial in patients without measurable extra-CNS lesions (NCT02927340), trials evaluating upfront radiotherapy and ALKi (e.g., NCT04193007), or radiotherapy concurrent with continuation of the ALKi upon isolated CNS progression during ALKi (e.g., the Dutch multicentre platform trial NL6518/NTR6707).

In conclusion, patients with ALK+ NSCLC with brain metastases greatly benefit from ngALKi, irrespective of prior brain irradiation or the presence of brain involvement at baseline, in the first-line, or after failing crizotinib. The sequential ALKi approach is effective in terms of CNS activity and in obtaining long-term survival. Importantly, whole-brain irradiation can often be deferred or avoided, and patients are spared from long-term radio-induced toxicity.

This article is freely accessible at touchONCOLOGY.com © Touch Medical Media 2020.

Cancer treatment has expanded rapidly in recent years as advancements in the fields of tumour biology and molecular diagnostics have informed the development of targeted therapies, improving survival in patients with oncogene-addicted cancers with therapeutically relevant molecular lesions. Osimertinib has become the standard-of-care treatment in the USA and elsewhere for classical epidermal growth factor receptor […]

Advanced non-small cell lung carcinoma (NSCLC) treatment paradigms have evolved during the past decade. Identification of tumor-specific molecular alteration in cancer driver genes has led to the development of targeted therapies.1–3 Most of the tumors harboring such alterations are sensitive to tyrosine kinase inhibitor (TKI) drugs, making such oncogenic drivers promising targets for the development of […]