Choriocarcinoma of testes is a very rare tumor, occurring either in pure form or as part of mixed germ cell tumor. The primary route of metastases of choriocarcinoma is hematogenous because the tumor is extremely vascular. The germ cell tumors otherwise have a propensity for lymphatic spread. The most common presentation in such patients is due to symptoms arising from the metastases of tumor to sites such as the lungs, liver, gastrointestinal tract, spleen, brain and adrenal glands. We report this case of a young male of primary testicular choriocarcinoma who had renal metastasis, which was discovered during the process of evaluation. This is a rare site of metastases, which can result in spontaneous renal hemorrhage and hematuria. β-HCG level of our patient was extremely high, 886,270 mIU/ml, which indicates a high tumor load in the body and subsequent poor outcome.

We present the case of a patient with testicular choriocarcinoma with renal metastases and inexplicably high β-HCG levels, indicating extremely high tumor burden and poor prognosis. We report this case on account of its rare incidence and rarer site of metastases, which has been known to result in spontaneous renal hemorrhage and hematuria in patients with metastatic choriocarcinoma to kidneys.3

A 35-year-old male patient presented with a history of injury to the right testis. He had noticed the unequal size of his testes, with the right one being bulkier than the left. Detailed history revealed that the patient also had a productive cough for 2 months. On evaluation, contrast-enhanced computed tomography (CT) of the chest showed multiple well-defined soft tissue nodules diffusely scattered in both lungs, with mild pleural effusion on the right side. Ultrasonography of the scrotum showed a large heterogeneous mass replacing the right testis. Serum marker study showed: β-HCG 886,270 mIU/mL, alpha-fetoprotein 1.22 ng/mL, and lactate dehydrogenase (LDH) 2,329 U/L. Baseline two-dimensional echocardiography showed left ventricle ejection fraction was normal at 57%. The patient was classified as high risk according to the International Germ Cell Cancer Collaborative Group criteria.2 He underwent right orchiectomy; post-operative scans and the histopathology report of surgical scan are described subsequently. 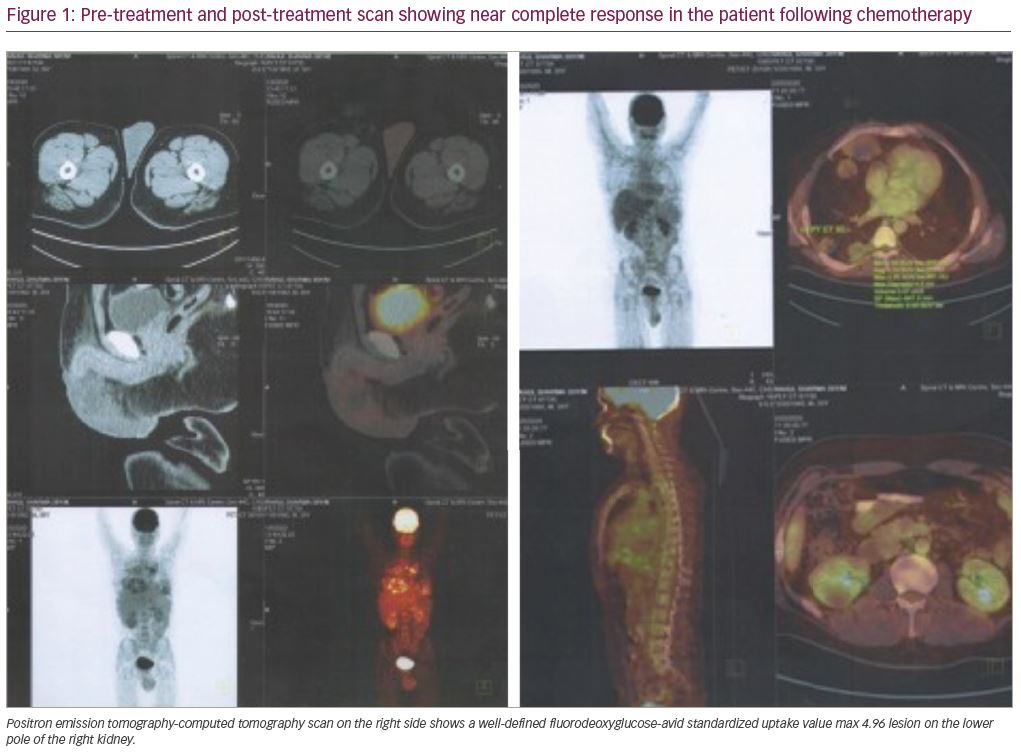 The histopathology report, after right inguinal orchiectomy, showed a tumor measuring 13.0 x 9.5 x 9.5 cm replacing the normal tissue and involving hilar soft tissue. The tumor was reddish–brown in color with areas of hemorrhage and necrosis. Morphological features were of malignant mixed germ cell tumor, consisting predominantly of choriocarcinoma (95%) with large areas of necrosis and hemorrhage and a minor component of seminoma (5%).

The patient was initiated on adjuvant chemotherapy regimen comprising of cisplatin, etoposide, and bleomycin (PEB) on a 5-day schedule with standard dosing—bleomycin 30 mg intravenous bolus on days 2, 9, and 16; etoposide 100 mg/m2/day for 5 days; and cisplatin 20 mg/m2/day for 5 days. Follow-up PET-CT scan revealed excellent response after four cycles of BEP. The renal lesion and other metastatic deposits disappeared completely. There were non-FDG–avid lesions in both lungs, the largest one was approximately 4.5 x 7.0 cm in the subpleural region of the lower lobe of the right lung. It is possible that these lesions occurred due to fibrosis of necrotic lesions in response to chemotherapy. Both β-HCG and LDH levels were drastically reduced (Figure 2). The persistent fibrotic nodules in both the lungs were removed surgically. The patient received regular follow-up for 6 months and is doing well. 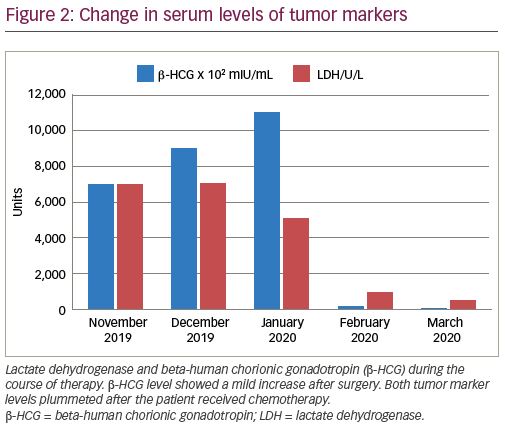 Testicular cancer is the most common malignancy in men aged 15–34 years and accounts for approximately 1% of all cancer in men.1,2 Choriocarcinoma is an unusual occurrence in testicular tumors, with an incidence of approximately 0.8 cases per year per 100,000 male population in countries with the highest frequency of testicular cancer.2 Jiang et al. retrospectively analyzed cases of males with choriocarcinoma treated at Peking Union Medical College Hospital between 1990 and 2012, and found that the mean age of occurrence was 20–29 years.4 Choriocarcinoma may be a part of non-seminomatous component or may exist in pure form as part of germ cell tumor. Both instances carry a poor prognosis for the patient. In the case presented here, choriocarcinoma constituted around 95% of the entire tumor, whilst 5% was seminoma.

The neoplastic trophoblasts have an affinity for blood vessels, and the hematogenous spread to different organs, such as the lungs, adrenals, liver, and brain appears early in the course of the disease and often results in the first manifested symptom. A series by Alvarado-Cabrero et al. confirms the proclivity for high-stage presentation, including the presence of distant metastasis, hematogenous spread, and poor outcomes related to testicular choriocarcinoma. Mixed germ cell tumors with a predominant choriocarcinoma component have a similar tendency for high-stage presentation, marked elevation of serum β-HCG levels, and aggressive behavior compared with pure choriocarcinoma.5

An important, and often fatal, complication of choriocarcinoma is due to spontaneous or post-chemotherapeutic hemorrhage. When this occurs in the lungs, the commonest site of metastases, it leads to hypoxic respiratory failure due to diffuse alveolar hemorrhage consequent to necrosis of vascular tumors.6,7

Some unusual sites of metastasis reported in the literature are the stomach, duodenum, jejunum, kidney, skin, and neck. Chaar et al.8 and Yokoi et al.9 have reported cases of metastasis of choriocarcinoma in the jejunum. Lowe et al. presented a case of an ulcerated mass in the stomach, where pathology confirmed it to be a malignant, poorly differentiated choriocarcinoma.10 Lauro et al. have described stomach tumor when patients presented with a chief complaint of hematemesis.11 Vardaros et al. reported a case of duodenal metastasis from choriocarcinoma,12 and Senkal et al.13 and Ahmadi et al.14 have independently reported cases of neck masses as the primary presentation in cases of testicular choriocarcinoma. Toberer et al. reported a case of cutaneous metastasis from underlying choriocarcinoma, in which the patient had an extremely high disease load and died within 9 days of treatment initiation.15 Uveal and choroidal metastases have also been reported in the literature.16,17 Ahsaini et al. presented a case of pure choriocarcinoma in a young man, revealed by jaundice. Despite general chemotherapy, he died due to lymph node metastasis at the hepatic hilum.18

There are a few case reports of the renal spread of choriocarcinoma in males. Li et al. reported the case of a 25-year-old man who presented with spontaneous renal hemorrhage, which on further workup was found to be secondary to choriocarcinoma; however, the case was complicated by cryptorchidism and hypospadias.3 The authors suggested choriocarcinoma was a difficult diagnosis because of its unusual presentation. We report on the second patient to be found with this presentation, who also had widespread disease with metastases in the lungs, mediastinal lymphnodes, and lower pole of the right kidney. His tumor marker levels of b-HCG were immensely high, corroborating the enormous tumor burden in the body. The lesion, however, showed significant reduction after chemotherapy. Lal et al. reported a case of choriocarcinoma in a female patient who presented with spontaneous renal hemorrhage.19

β-HCG has an important diagnostic and prognostic value in choriocarcinoma.5 The proportion of patients with elevated serum β-HCG levels is very high (96.4%).4,5 β-HCG levels are directly proportional to the tumor burden inside the body, and the fall in its levels is used to monitor the response and recurrence of the disease. β-HCG of >1,000 mIU/mL is often considered diagnostic of choriocarcinoma. Our patient had β-HCG >110,000 mIU/mL. After a thorough search of the literature, we conclude this is the highest reported level to date. The patient in this case report underwent right inguinal orchiectomy followed by chemotherapy with BEP. After surgery, there was a temporary increase in β-HCG, probably due to surgical manipulation, but the levels fell drastically after two cycles of chemotherapy.

This case report highlights the rarity of renal metastases in testicular choriocarcinoma, and we hope that the reporting of such a case will contribute to the data on this rare malignancy. Like other reported cases, our patient showed a very good response with chemotherapy. Most of the complications in patients with choriocarcinoma are due to chemotherapy-related hemorrhages in tumor masses, but the increasing literature allows us to provide prophylactic management for expected complications and, therefore, improve rates of patient survival.

Jatin Sarin, Rimpi Bansal, Puneet Kaur, Anureet Kaur and Akshita Sarin have no financial or non-financial relationships or activities to declare in relation to this article.

Informed consent was received from the patient involved in this case study.

This article is freely accessible at touchONCOLOGY.com © Touch Medical Media 2020.

Bladder cancer (BC) is the sixth most common cancer in the world, accounting for 81,180 estimated new cases and 17,100 deaths in 2022.1 BC is most frequently diagnosed among people aged 65–74 years.1 For patients with disease limited to the bladder, the depth of invasion of the primary tumour is the most important prognostic variable in […]