Back to Activity
CORRECT!
Next question

Lung cancer is the leading cause of cancer deaths worldwide. Every year, it causes more than 1.6 million deaths; more than breast, colon and prostate cancers combined.1 Non-small cell lung cancer (NSCLC) accounts for 87% of all patients with lung cancer.2 The development of immune checkpoint inhibitors has revolutionised the treatment of metastatic NSCLC. However, approximately 30–40% of patients with NSCLC present with stage III disease and this is, in the majority of cases, unresectable.3 Stage III NSCLC is a heterogeneous disease that includes locally advanced primary tumours that have infiltrated mediastinal organs, involve mediastinal lymph nodes, or are larger than 7 cm.3 The standard of care in this patient group is concurrent chemotherapy and radiation, which has a 5-year survival rate of only 15–20%,4 and there have been no significant treatment advances in decades. However, recent data on durvalumab, a programmed cell death-ligand 1 (PD-L1) inhibitor, suggests that immunotherapy could become the new standard of care for patients with stage III, locally advanced NSCLC.

The phase III global study to assess the effects of MEDI4736 following concurrent chemoradiation in patients with stage III unresectable non-small cell lung cancer (PACIFIC trial), included 709 patients with stage III NSCLC who did not have disease progression after two or more cycles of platinum-based chemoradiotherapy and a World Health Organization Performance Status of 0–1. Administering durvalumab after chemoradiotherapy increased the median progression-free survival (PFS) by 11 months (16.8 months with durvalumab versus 5.6 months for placebo).5 The improvement in PFS was consistent across all patient subgroups; the response rate was higher with durvalumab than with placebo (28.4% versus 16.0%), and the median duration of response was longer (72.8% versus 46.8% of the patients had an ongoing response at 18 months). The safety profile was also acceptable, with only slight increased toxicity in the durvalumab group (grade 3/4 adverse events in 29.9% of the durvalumab group versus 26.1% of the placebo group, with adverse events leading to discontinuation in 15.4% of durvalumab-treated patients and 9.8% of the placebo group). Common adverse events included cough, fatigue, upper respiratory tract infections, dyspnea and rash.5

As a result of these data, the Food and Drug Administration (FDA) approval of durvalumab (Imfinzi?, AstraZeneca) has been expanded to include the treatment of patients with unresectable stage III NSCLC whose disease has not progressed following concurrent platinum-based chemotherapy and radiation therapy.6 Durvalumab is the first immunotherapy to be approved for this indication.

The data from PACIFIC suggests that immunotherapy acts synergistically with chemotherapy and/or radiation: patients who were randomised within 2 weeks of finishing radiation therapy had slightly better outcomes than patients who were randomised more than 2 weeks after finishing radiation therapy. A number of ongoing trials are investigating immunotherapy in combination or sequence with radiotherapy (see table). Further research is needed on the duration and timing of immunotherapy, the best chemoradiotherapy regimen with which to combine it, and the selection of patients most likely to benefit from this treatment based on predictive biomarkers. Immunotherapy may also be useful in the neoadjuvant setting; in a phase II study, neoadjuvant nivolumab has shown promise in stage 1B-IIIA NSCLC.7

It remains to be seen whether these impressive results for PFS will translate to improved overall survival. However, as a result of this study, immune checkpoint inhibitors are likely to become the standard of care in stage III unresectable disease. These findings will have an impact on a large number of patients. With the increasing availability of computed tomography (CT) screening for lung cancer,8 it is likely that NSCLC will be detected at earlier disease stages in future. The results of the PACIFIC trial represent the first steps forward in the incorporation of immunotherapy into the treatment paradigm for non-metastatic NSCLC. 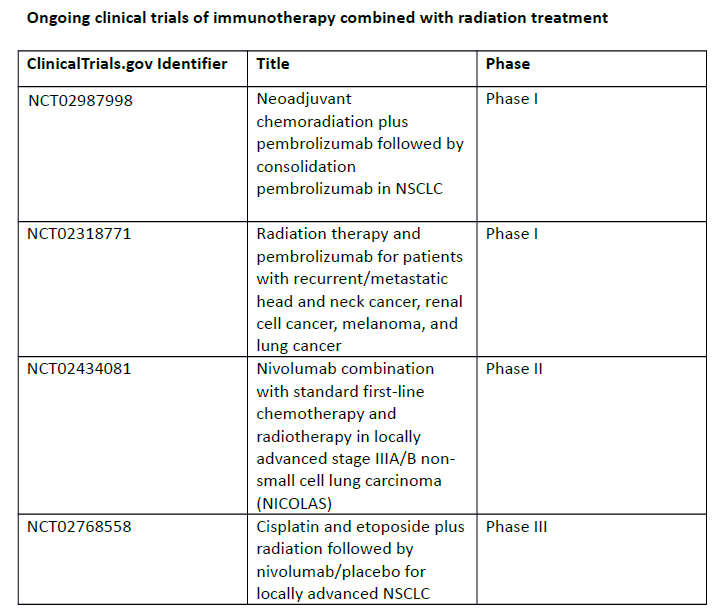