Plummer-Vinson syndrome is a rare disorder consisting of a constellation of signs and symptoms related to a chronic iron deficiency state. Affected patients usually present with dysphagia secondary to esophageal hypomotility or web formation, oral manifestations such as glossitis, stomatitis, and cheilitis, and chronic sideropenic anemia. In this report, we present two cases where, in addition to these diseasedefining features, otologic symptoms were also found. Chronic stenosing external otitis with auditory canal web formation can represent, in this context, the manifestation of an underlying systemic cause and may be triggered by the same etiopathogenic factors that lead to esophageal dysfunction and web formation. As a result, a new perspective on the eponym of Plummer-Vinson disease is presented highlighting the wide and variable spectrum of head and neck manifestations of iron deficiency, a common but frequently overlooked medical condition.

Plummer-Vinson syndrome is a rare disorder that predominantly affects middle-aged women.1 It is widely renowned throughout the medical literature as the result of a chronic iron deficiency state. Yet, the underlying mechanisms leading to the multitude of head and neck manifestations characteristic of this disease are only speculative and are not completely understood. Such manifestations include oral cavity inflammation (cheilitis, stomatitis, and atrophic glossitis) and intermittent dysphagia related to esophageal dysmotility and upper esophageal web formation. In this report, we present two patient cases and describe otologic findings that may be linked to this disorder. As a result, iron deficiency should be regarded as a systemic condition that can potentially affect any organ system and go beyond the scope dictated by the Plummer-Vinson eponym.

A 45-year-old woman presented to us complaining of bilateral mild-to-moderate conductive hearing loss for 8 years. Concomitantly, she had bilateral intermittent serous otorrhea diagnosed as chronic external otitis from undefined cause. She also complained of severe dysphagia to solid food; she was diagnosed with an upper esophageal web associated with decreased esophageal motility, for which she was treated with multiple esophageal dilatations, with transient improvement. She also mentioned an oral cavity burning sensation aggravated by meals. Six years prior, she received several red blood cell transfusions with iron repletion therapy in the context of a severe sideropenic anemia caused by her intense menses. She noted a drastic improvement of her oral, gastrointestinal (GI) and otological symptoms after each treatment; however, symptom recurrence occurred with discontinuation of iron supplementation.

On physical examination, otoscopy revealed a bilateral external auditory canal (EAC) stenosis associated with an epithelial swelling (Figure 1). At the junction of the cartilaginous and bony part of the EAC, circumferential bilateral webs were identified. In addition, the inflammation in the EAC wall extended medially from the web to involve the epithelial layer of the tympanic membrane. Swab cultures from the EAC did not demonstrate any bacterial or fungal growth. Oral cavity examination revealed multiple ulcers of the oral mucosa located on the inferior and superior gum; severe atrophic glossitis, angular cheilitis and dental loss were also evident (Figures 2–4).

On blood examination, a mild microcytic anemia (hemoglobin at 10 g/dL, normal range12–15.5 g/dL) was found, with a mean corpuscular volume of 55 fL (normal range 80–96 fL/red cell) and a serum iron of 5.1 μmol/L (normal range 11–32 μmol/L). Ferritin was also depleted at4.9 ng/mL (normal range 10–250 ng/mL) and transferrin saturation was at 4% (normal range 20–50%). A tissue biopsy taken from the esophageal and the EAC webs only showed the presence of chronic non-specific inflammatory cell infiltrate. 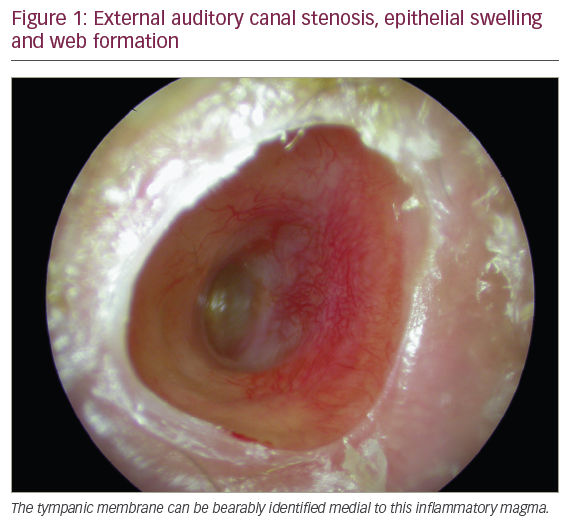 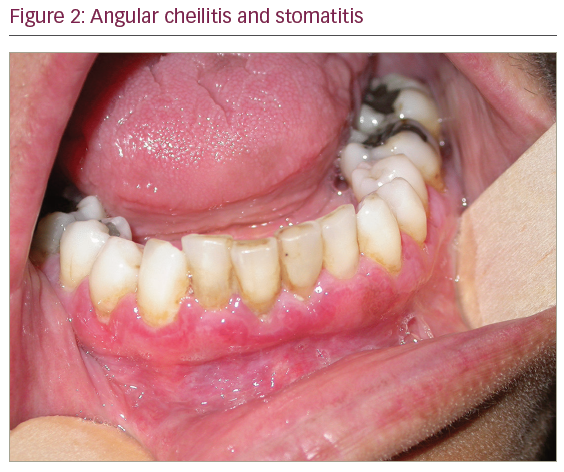 The patient was treated with iron supplementation. She also received 60 mg oral prednisone daily for 1 week with repetitive application of a topical corticoid (dexamethasone) ointment in the auditory canal. Two months after beginning iron repletion therapy, the patient felt a drastic improvement of her symptoms. An audiogram for hearing assessment was done 3 months after treatment and was normal. At 1-year follow-up, the patient is stable with no recurrence of her otologic and oral symptoms.

A 28-year-old male patient presented for bilateral hearing loss. He has a history of beta-thalassemia minor with microcytosis and concurrent iron deficiency as result of a vegan diet. He also complained of burning mouth sensation and mild dysphagia to solid food. Examination revealed the presence of mild stomatitis and glossitis without significant anomaly of the upper aerodigestive tract. Bilateral EAC inflammation and stenosis secondary to medial fibrous plugs was found on otoscopy. Bilateral moderate conductive hearing loss was evident on pure tone audiometry with a 45 dB mean air-bone gap. Despite the absence of the constellation of features pathognomonic of Plummer-Vinson syndrome, a dramatic improvement of oral and otologic symptoms was noted with iron repletion therapy. Again, short-term local therapy with a steroid ointment was used after eliminating an infectious cause to the EAC inflammation. 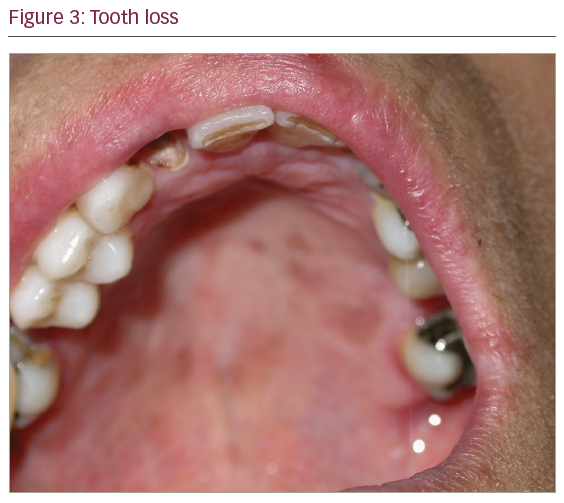 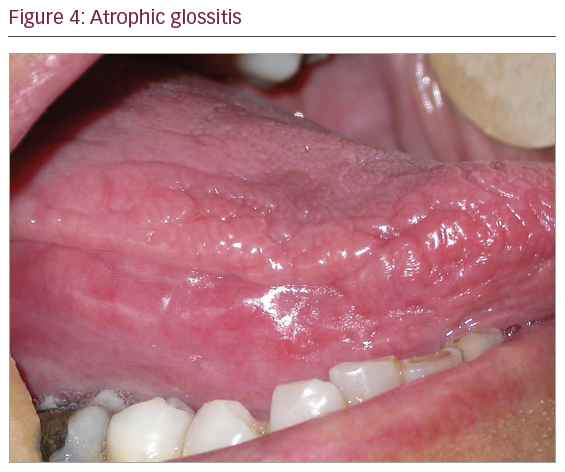 In the presence of iron deficiency anemia, glossitis, cheilitis, dysphagia, and esophageal web formation, the diagnosis of Plummer-Vinson syndrome, as known in the literature, was considered. However, these patients were also complaining of new symptoms: bilateral otorrhea and conductive hearing loss following an inflammatory process of both auditory canals which were strongly correlated to the other symptoms.

Plummer-Vinson disease was introduced for the first time in the literature as a syndrome by AF Hurst in 1926.1 It is often described as a systemic inflammatory process in the context of a chronic iron deficiency state leading to several symptoms including dysphagia secondary to esophageal hypomotility and web formation, odynophagia, oral pain from oral mucosa inflammation, atrophic glossitis, and angular stomatitis among others.2,3 Although craving for certain smells and food without nutritional values (desiderosmia and pica, respectively) have been described with iron deficiency, these symptoms were not reported by our patients.

What makes this report relevant is the description of otologic manifestations in the context of iron deficiency. There are few reports in the literature that link iron deficiency states with deafness (sensorineural and mixed) in both adults and children.4,5 Also, patients with sideropenic anemia are at increased risk of developing sudden neurosensorial hearing loss.4,5 However, there are no published studies that describe the effect of iron deficiency on the conductive apparatus of the human ear. To our knowledge, this is the first report that strongly correlates a bilateral inflammatory process of the EAC with chronic iron deficiency anemia.

The etiopathogenesis of Plummer-Vinson syndrome is not fully understood and the underlying suggested mechanisms are only speculative. Autoimmune, genetic and metabolic causes have been proposed. To better apprehend the underlying pathophysiology, we need to understand why all these symptoms appear during iron deficiency states. The depletion of iron-containing electron transport enzymes found in the mitochondria may affect the skeletal muscles at the level of the pharynx and upper esophagus.6 The effect of iron deficiency on the human ear is not clear. Intracellular iron-dependent molecular disturbances and ischemic changes secondary to chronic iron deficiency anemia may have a great impact on the striae vascularis and hair cells of the human cochlea.4,5,7 However, the mechanisms underlying the association between iron deficiency and EAC inflammation and atresia are yet to be determined.

Two kinds of iron-deficiency-related symptomatology can be described according to the rapidity of cellular turnover of the tissues involved: organs with rapid turnover such as the epithelial lining of the upper alimentary tract are especially susceptible to iron deficiency; however, this rapid turnover has the advantage of allowing a rapid recovery following iron treatment.8 On the other hand, in slowly evolving cells, the symptoms progress more slowly but are generally irreversible. This is usually the case for the dental changes and atrophic nails. Auditory canal involvement can be reversed with medical therapy during early stages. However, repetitive inflammation of the EAC over a prolonged period of time progressively thickens its medial aspect and results in the deposition of a dense fibrotic plug;9 at this stage, only surgery could be of help.

The duration of anemia as well as its severity seems to strongly correlate with the onset and fluctuation of these different symptoms. In our patients, cultures of the auditory canal were done in order to rule out any underlying infectious etiology. In order to accelerate the healing process and to avoid the passage into the fibrotic stage, we treated the inflammation aggressively with weekly application of a topical corticosteroid ointment into the canal for 3 weeks.

The assumption of a possible link between iron deficiency and chronic external otitis was supported by multiple factors: first, the same otologic finding was described in two different patients with varying degrees of iron deficiency and related symptoms. In addition, auditory symptoms fluctuated according to the hemoglobin and iron levels in the body: the first patient reported subjective improvement in her hearing deficit and ear discharge after blood transfusions in the past. Also, otologic remission was maintained when iron repletion was achieved and long after discontinuation of any topical treatment. Lastly, the chronic non-specific inflammation found on histologic examination of the specimen taken from the EAC in affected patients did not fit into a definite diagnosis given the clinical circumstances. As a result, the presence of an independent immune-related steroid-sensitive event affecting both EAC simultaneously that happened to occur in patients with iron deficiency, seemed like a less probable eventuality. Nevertheless, we also acknowledge that although the association between obliterative external otitis and iron deficiency likely occurs in a higher number of similar cases, a more prolonged follow-up period is needed in order to prove it. The relapse of the ear pathology when iron deficiency recurs as well as its resolution with iron repletion are indeed required to confirm the sideropenia-related nature of these otologic findings.

Plummer-Vinson syndrome, as described in the literature, is no more than the association of symptoms and signs that occur as a result of a long-standing iron deficiency state. Several other findings could also be variably present from one patient to another. Chronic iron deficiency anemia could be directly related to EAC inflammation and web formation resulting in conductive hearing loss. If diagnosed promptly and treated adequately, it could prevent the passage to an irreversible fibrotic stage. Therefore, it is important to keep in mind that common non-specific findings encountered in daily otolaryngology practice could be the manifestation of an underlying systemic disorder that warrants early recognition and appropriate management.

Michel Kmeid and Jade Nehme have
nothing to disclose in relation to this article.

Double-blind peer review.
Compliance with Ethics: All data collected are subjected
to prior ethical approval ensuring the safety, rights and
anonymity of all participants in this review. All procedures
were followed in accordance with the responsible
committee on human experimentation and with the
Helsinki Declaration of 1975 and subsequent revisions.

All named authors meet the International
Committee of Medical Journal Editors (ICMJE) criteria
for authorship of this manuscript, take responsibility
for the integrity of the work as a whole, and have
given final approval to the version to be published.

This article is published under the Creative
Commons Attribution Noncommercial License, which
permits any non-commercial use, distribution, adaptation
and reproduction provided the original author(s) and
source are given appropriate credit. © The Authors 2018.