Reticulo-endothelial macrophages are central for the regulation of iron homeostasis, thanks to their ability to recycle red blood cell (RBC)-derived iron. Macrophages are also key innate immune cells which exhibit remarkable functional plasticity. These two roles are tightly interconnected: on the one hand, macrophage polarisation dictates the expression of iron-regulated genes and determines cell iron handling; on the other, iron availability affects immune effector functions. Recent observations support a role for free haem and iron in shaping macrophage plasticity towards an M1-like pro-inflammatory phenotype. These findings have implications for the pathophysiology of sickle cell disease (SCD), hallmarked by haemolysis and elevated circulating haem and iron, as well as for the tumour microenvironment, characterised by haemolytic RBC extravasation and iron-loaded macrophages. Consistently, haem scavenging suppresses the pro-inflammatory profile of macrophages, reducing chronic inflammation in SCD, whereas nanoparticle-mediated iron delivery to the tumour microenvironment elicits pro-inflammatory macrophages with tumour killing properties, thus delaying tumour growth. This line of research paved the way for the therapeutic modulation of macrophage plasticity achievable through the application of different iron sources or scavengers/chelators according to the desired beneficial effect.

Reticulo-endothelial (RES) macrophages are central for the regulation of iron homeostasis. These cells have the ability to handle a high amount of haemoglobin-derived iron, released after senescent red blood cell phagocytosis. Eventually, iron is exported to the bloodstream through the only known iron exporter, ferroportin, and is utilised to support the production of new red blood cells in the bone marrow. This process enables efficient recycling of iron and the maintenance of systemic iron balance.

In the last decade, the study of macrophage polarisation has moved into focus, triggered by the in vivo observation of a variety of macrophage subtypes hallmarked by diverse functions and linked to several diseases, including atherosclerosis, cancer, infectious and autoimmune diseases.1–4 Due to their dual role in iron homeostasis and immunity, it has been first hypothesised that macrophage iron handling is affected by cell polarisation.2,5 The acquisition of a specific macrophage phenotype dictates the expression of iron-regulated genes and determines cell iron accumulation and trafficking. M1 macrophages show an iron retention phenotype, hallmarked by low expression of CD163, HO-1 and ferroportin, and high expression of ferritin. In contrast, M2 macrophages show higher iron turnover, associated with increased iron uptake, recycling and export.2 This suggests that cytokines responsible for macrophage polarisation determine the expression of iron-related genes and therefore cell iron handling.2,5 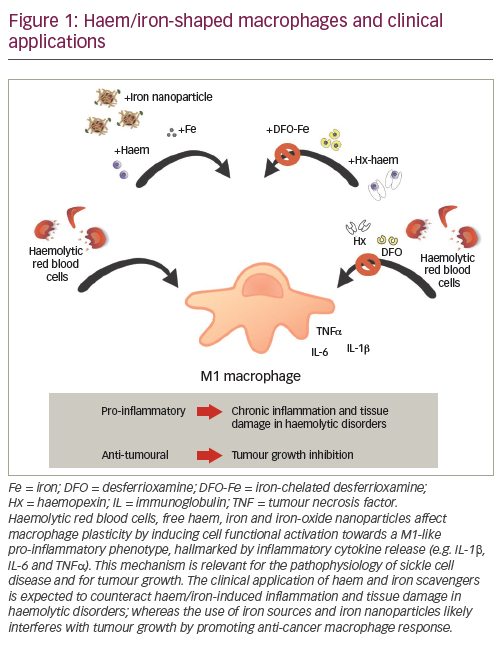 In the second instance, we hypothesised that macrophage iron exposure could directly affect cell polarisation. Interestingly, both in vitro and in vivo, free haem and iron polarise macrophages towards an M1-like pro-inflammatory phenotype.3,6 Haem- and iron-scavenging, through the haem-binding plasma protein haemopexin, or the chelator deferoxamine, prevents this effect (Figure 1). Our findings indicate that iron availability affects macrophage plasticity and determines cell immune effector functions.3 The polarisation programme of macrophages induced by cytokines can be enhanced (M1→M1+) or even shifted (M2→M1) upon further exposure to haem or iron.3 This suggests that iron exerts a dominant effect on macrophage polarisation, inducing a shift toward a proinflammatory phenotype and modulating the phenotypical differences acquired in response to the environmental stimuli.

Collectively, these observations suggest that iron, in its different forms, has a key role in shaping macrophage phenotype. Data available so far demonstrate the existence of a close interconnection between the immune and the iron handling functions of the macrophage and prove that these activities dynamically influence each other. These findings have potential implications for several pathologic conditions, including: haemolytic diseases, where red blood cell haemolysis and elevated circulating haem might promote a detrimental chronic inflammatory state; infectious diseases, where free haem and iron, released upon cell damage, might boost inflammation and enhance resistance to infections; and tumours, where free haem released in haemorrhagic areas might induce an anti-tumoral inflammatory response. Importantly, current knowledge supports the concept that macrophage plasticity can be manipulated for therapeutic purposes by applying different iron sources or scavengers/chelators according to the desired beneficial effect. In the near future, we expect to learn more in regard to the effect of different iron sources, including red blood cells (e.g. transfusion) and iron preparations (e.g. iron formulation administered intravenously or orally in anaemic patients) on macrophage polarisation. This will help us to discriminate between more and less inflammatory iron sources, with relevance for disease conditions associated with iron/haem overload (sickle cell disease, thalassaemia, paroxysmal nocturnal haemoglobinuria, haemochromatosis) and therapeutic approaches where iron is administered (transfusions, oral/intravenous iron infusion).

Francesca Vinchi has nothing
to declare in relation to this article.

This article is a short opinion
piece and, as such, has not been submitted to
external peer reviewers, but was reviewed by the
editorial board for accuracy before publication.

The named author meets the International
Committee of Medical Journal Editors (ICMJE) criteria
for authorship of this manuscript, takes responsibility
for the integrity of the work as a whole, and has given
final approval for the version to be published.

This article is published under the Creative
Commons Attribution Non-commercial License, which
permits any non-commercial use, distribution, adaptation,
and reproduction provided the original author and
source are given appropriate credit. © The Author 2018.